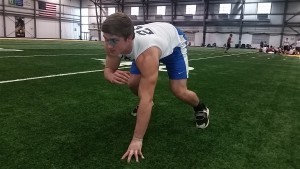 Ben Stille was among the well-known recruits at the recent Blue-Grey Regional Combine held at the training facility for the Kansas City Chiefs.

The most recent stop on the current nationwide tour for the Blue-Grey Regional Combine was this past weekend in Missouri at the home of training camp for the Kansas City Chiefs. For the record, the two-day and four-session turnout exceeded expectations.

The talent level, across the board, was about as good as any we’ve seen in the three-plus months out on the road and that much was confirmed by our staff of former NFL players, led by Mark McMillian and Arlen Harris. So, here’s a look at the best of the best.

Alex Faddoul, QB, Helias (MO): The 6-foot-2 and 210-pound junior was one of the premier players at his position. Accordingly, Tennessee, Vanderbilt and Wisconsin are all interested in him. His first offer, in fact, figures to materialize sooner rather than later.

Harley Hazlett, QB, Abilene (KS): About as talented as they come, the 6-4 and 185-pound junior was relaxed and effective from start to finish. Suppose that explains why schools such as Kansas, Kansas State and Northern Iowa have been in contact with him.

Peyton Huslig, QB, Andover Central (KS): The 6-3 and 180-pound junior did particularly well in the spotlight despite the presence of many talented counterparts and the overall effort justifies interest he’s receiving from the likes of Iowa State and Kansas State.

Chase Templeman, QB, Gretna (NE): A bit raw now, still with plenty of upside, the 6-1 and 190-pound sophomore wisely took advantage of opportunities. After seeing him in action, it comes as no surprise to learn that Nebraska recently reached to test the waters.

Triston Fairchild, RB, Papillion La Vista South (NE): On the official roster, although unable to attend due to prior commitments, the 5-10 and 190-pound junior with interest from Missouri and Nebraska remains on the radar. We’ll be keeping a close eye on him.

LaRon Wallace, RB, Southern Boone (MO): The 5-10 and 180-pound junior was determined to make a name for himself, regardless of the opponent across the line of scrimmage. Mission accomplished, too. Seemingly each and every time, he ended up delivering.

Nate White, RB, Papillion La Vista (NE): Not to be outdone by the ball-carriers surrounding him, the 6-foot and 180-pound junior left a lasting impression of most of his peers. Perhaps more importantly, several scouts in attendance gave him rave reviews.

Brayden Hull, RB, Timberland (MO): The 5-10 and 170-pound sophomore did a little bit of everything. And most of it well. Whether it was running the ball up the middle or to the outside, catching passes out of the backfield or blocking, no one was more consistent.

Briley Moore, WR, Blue Springs South (MO): There’s no doubt about it, the 6-4 and 215-pound junior was the top prospect at his position. It wasn’t even close. Few were on his level. Colgate and South Dakota State have offered. Missouri could be the next.

Jerome Hawkins, WR, Blue Springs South (MO): At this stage of the game, the future seems bright for the 5-10 and 148-pound sophomore with loads of untapped potential. In the meantime, however, the lack of experience didn’t hurt him in this kind of setting.

Jason Edwards, WR, School of the Osage (MO): The 6-1 and 175-pound sophomore comes from good bloodlines given the fact that several family members have moved on and played college ball. After his effort, signs point to him heading down a similar path.

Raye Wilson, DB, Junction City (KS): Once a relative unknown on the whole recruiting landscape, the perception about the 5-11 and 180-pound junior is sure to change once word starts to spreads about his effort. He made a name for himself, that much is certain.

Kody Melugin DB, El Dorado (KS): The 5-7 and 160-pound junior might be considered undersized by many. Don’t let an often times perceived lack of stature fool you, however. His technique and intensity make up for the frequent unfair knock on the measurables.

William Bradley-King, LB, Hogan Prep (MO): From sideline to sideline, the 6-4 and 220-pound junior covered more than enough ground and did so against supposedly quicker opponents. Western Illinois is interested in him. Missouri is now also coming on strong.

Ryan Workman, LB, Olathe North (KS): The 5-9 and 200-pound junior might not look like your run-of-the-mill prospect at the second level. Nevertheless, that didn’t stop him from making a major impact. Jacob Lewis from Staley (MO) turned multiple heads, too.

Chester Graves, DL, Park Hill (MO): The 6-4 and 225-pound sophomore couldn’t be stopped, plain and simple. Suppose that best explains why he’s one of the nation’s premier players in the Class of 2017 and has scholarships in place from Iowa, Kansas and Missouri.

Claudio Martin, DL, Rockhurst (MO): Smart and versatile, the 6-3 and 250-pound junior has a chance to be special. Not surprisingly, Indiana, Kansas, Iowa State, Nebraska and Missouri have jumped on the bandwagon and his first offer is right around the corner.

Ben Stille, DL, Ashland Greenwood (NE): The 6-4 and 220-pound junior had trouble with a lingering ankle injury. To his credit, he showed up to workout with causing further damage. Near a full recovery nowadays, Iowa, Kansas State and Nebraska are interested.

Luke Curl, OL, McCook (NE): The 6-10 and 295-pound junior stood head and shoulders above most of the crowd. That is, both literally and figuratively. He was more than a big body, though, and did well in this setting. South Dakota is among the potential suitors.

Isaiah Colbert, OL, Raytown South (MO): Never one to back down from a challenge, the 6-4 and 270-pound junior lined up against anyone and everyone. At just about anytime, for that matter. In terms of the volume of overall reps, no one put in more work than him.

Kevin Williams, OL Westside (NE): An underclassmen who’s continues to evolve, the 6-5 and 285-pound sophomore wasn’t intimidated by his more experienced opponents. Another thing, he’s not only willing to accept constructive criticism, but also, ready to learn. 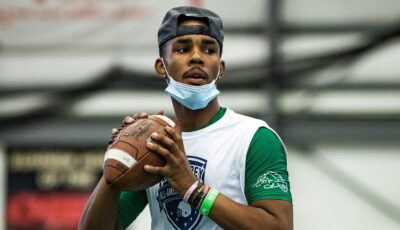 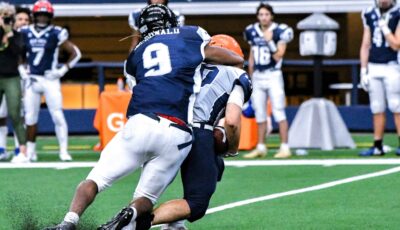