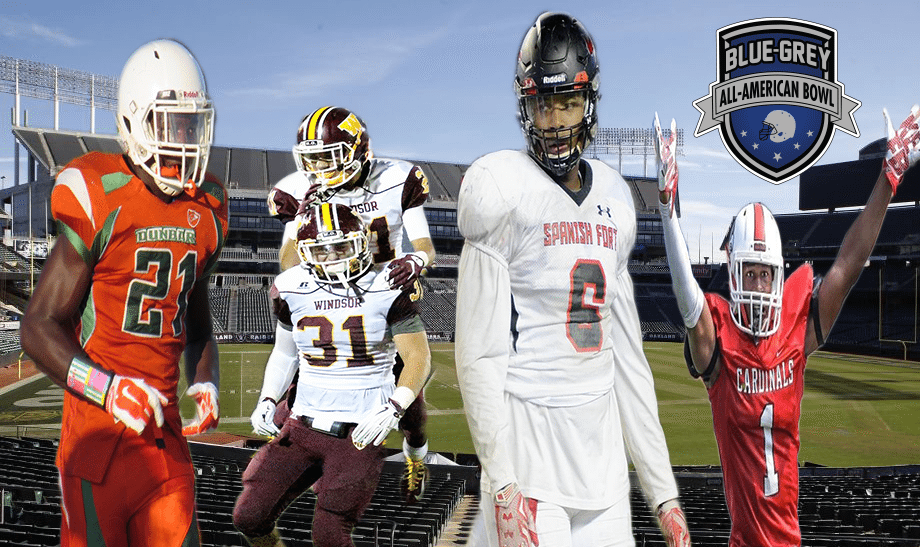 Based on the decision from the Blue-Grey Football Selection Committee, it’s time to unveil the brand’s All-American Bowl Watch List after the staff traveled the country and stopped at NFL facilities with its NFL veteran coaches to evaluate prospects in the Class of 2017.

Moving forward, expect plenty of names to be added in this space. Also, official announcements on some, but not all, of this year’s game participants will be revealed over the next couple of months. The process continues until the end of November. Stay tuned for details.

Similar to the past, the All-American Bowls are in January at Dallas Cowboys’ AT&T Stadium, Jacksonville Jaguars’ EverBank Field or Oakland Raiders’ Coliseum. Each will be nationally broadcast on Impact Football Network or ESPN (pending contract negotiations).

Worth mentioning, during All-American Bowl weekend, the individuals are under the guidance of NFL veterans. Mark McMillian, Arlen Harris, George Teague, Mike Alstott and Randall Cunningham are a few one-time professionals. For a list, follow this link (click here).

In the past, with many of the country’s premier recruits on the prep circuit in one place, there has been no shortage of talent on the field. For a list of game alumni, follow these links: Class of 2016 (click here), Class of 2015 (click here) and Class of 2014 (click here).

That said, a majority of the prospects featured below attended a recent nationwide All-American Combine (Regional or Super level) held at venues such as the Tampa Bay Buccaneers Raymond James’ Stadium and Cincinnati Bengals’ Paul Brown Stadium, among others.

Recruits who missed the All-American Combines at the training facilities of the Arizona Cardinals, Chicago Bears, Kansas City Chiefs and Philadelphia Eagles still received an acknowledgement after meeting standards of the brand’s aforementioned Selection Committee.

Editor’s note: Considering the amount of research involved with the scouting process, a pair of stories will focus on the players who have made cut for the All-American Bowl Watch List. For a closer look at who’s on the offensive side of the ball, follow the link (click here).

Amir Riep, Colerain (OH): An Ohio State commit, the 5-foot-11 and 185-pound senior appears to be a lock for one of the barnd’s three postseason games. The choice is his, essentially.

Keldrick Carper, Plain Dealing (LA): A Texas A&M commit, the 6-3 and 185-pound senior can essentially line up at any spot on the field and be a contributor. Nothing wrong with that.

Josh Thompson, Nacogdoches (TX): A TCU commit, the 5-11 and 182-pound senior seems poised for an appearance on the biggest stage around, in his home state at Jerry’s World.

D.J. Brown, Creekside (GA): A Penn State commit, the 5-11 and 175-pound senior had a laundry list of schools hoping for a pledge. That is, of course, until he shut the process down.

Marcus Hayes, Lutheran (IL): A Western Michigan commit, the 5-11 and 187-pound senior was among the top prospects on the All-American Combine circuit (Regional or Super levels).

Phazione McClurge, Mount Carmel (IL): A North Dakota State commit, the 6-1 and 190-pound senior is champing at the bit for an opportunity to deliver in the national spotlight.

Ray Coggins, Wilson Central (TN): An Eastern Kentucky commit, the 5-11 and 185-pound senior has the ability to limit the overall effectiveness of the opponent’s top pass-catcher.

Richard Bowens, St. Mary’s (MI): An Iowa State commit, the 6-1 and 170-pound senior wants nothing more than to show what he can do with, and against, the nation’s best.

Randall Haynie, Cardinal Gibbons (FL): A Vanderbilt commit, the 6-foot and 178-pound senior was a target of several schools. In the end though, the Commodores were the best fit.

Marlin Brooks, Coral Gables (FL): A Florida International commit, the 5-10 and 165-pound senior has thrived when matched up one-on-one with the opponent’s top pass-catcher.

Zaire Webb, Fletcher (FL): A Washington State commit, the 6-foot and 175-pound senior is capable of locking down the opponent one-on-one by playing off or bump-and-run.

Tre White, De La Salle (CA): The 5-11 and 175-pound picked up his first scholarship not long ago, and since then, the rest of the dominoes have fallen into place. Sky’s now the limit.

Ahman Ross, The Bolles School (FL): The 5-11 and 190-pound senior, with double-digit offers, means business on the gridiron. He can cover and hit with the best of them.

Jalen Cole, Mater Dei (CA): The 5-9 and 165-pound senior has been in contact with teams from the Pac-12 Conference, specifically speaking Washington and Washington State.

Tre Bugg, Williams Field (AZ): The 6-foot and 175-pound senior has gained considerable momentum on the recruiting trail. When all is said and done, he’ll have plenty of options.

Evan Fields, Midwest City (OK): The 6-2 and 190-pound senior is on the radar of more than a few teams and his offer total could soon eventually approach the 20-school plateau.

D.J. Green, Woodrow Wilson (TX): With more than 10 scholarships underneath his belt, the 5-11 and 170-pound senior doesn’t figure to have any problems picking a future home.

Kayne Roberts, Greenback (TN): The 6-3 and 195-pound senior took advantage of his opportunity at the All-American Combine (Tennessee Regional) and thus left a lasting impression.

Blake Jenkins, Centennial (CA): No longer known primarily in West Coast circles, the 6-1 and 190-pound senior with broadened horizons could find a home in the Big 12 Conference.

Tony Fields, Desert Pines (NV): An Arizona commit, the 6-2 and 205-pound senior appears to be on the fast-track, with graduation plans in motion to enroll early on campus in Tucson.

Chase Lasater, Trinity Christian (FL): A Michigan commit, the 6-2 and 235-pound senior started to come into his own shortly after the All-American Combine (Jacksonville Regional).

Aundre Kearney, Mandarin (FL): A Virginia Tech commit, the 6-2 and 220-pound junior might make an appearance in the game in his own backyard, where Blake Bortles calls home.

Sherrod Greene, Rocky Mount (NC): A South Carolina commit, the 6-1 and 220-pound senior had plenty of interest from teams in the ACC. Furthermore, Alabama was in the picture.

Darien Clemons, Piqua (OH): A Michigan State commit, the 6-1 and 214-pound senior has received some rave reviews from just about everyone, coaches and scouts alike. Rightfully so.

Bradley Jennings, Sandalwood (FL): A Miami commit, the 6-2 and 215-pound covers plenty of ground, that’s from sideline to sideline. At the point to contact, he packs a punch, too.

Ayinde Eley, Good Counsel (MD): A Maryland commit, the 6-5 and 205-pound senior had plenty of choices, yet in the end, playing for the Terrapins on Saturdays was an ideal fit.

Jacob Phillips, East Nashville Magnet (TN): The 6-3 and 231-pound senior has been for a while, and will likely remain in the foreseeable future, a household name on the national level.

Shanon Reid, Dunbar (FL): The 6-1 and 195-pound senior is as versatile as the come, a playmaker at the second level, and perhaps, capable of lining up in the secondary at the next level.

Christian Pluchino, IMG Academy (FL): The 6-2 and 235-pound senior is a force to be reckon with from the outside. Perhaps that best explains his five offers, including one from Louisville.

Amin Black, Imhotep Institute (PA): Supposed to make an impact at the All-American Combine (Eastern Regional), the 5-11 and 210-pound senior didn’t disappoint when given the chance.

Alec Hamilton, Regis Jesuit (CO): The 6-1 and 220-pound senior is one of the top recruits at his position on the gridiron from the Rocky Mountain region. Few would dispute that fact.

Jordan Walker, Silverado (NV): The 6-1 and 205-pound senior has a motor that does not stop. Knowing one speed only, with his foot on the pedal throughout, he’s coming at you fast.

Cross Poyer, St. John Bosco (CA): On radar of West Coast schools, it’s a mere matter of time before the rest of the country figures out the skill set of the 5-11 and 190-pound senior.

Corte Tapia, Windsor (CO): A Colorado State commit, the 6-3 and 220-pound senior was unstoppable at the All-American Combine (Colorado Regional). Nothing has changed since.

Vershawn Brock, Morgan Park (IL): In the running for a roster spot since last year, the 6-foot and 230-pound senior and one-time Army commit has inched a bit closer to a selection.

Braden Valentine, Williams Field (AZ): The 6-1 and 220-pound senior appears to have the inside track on a possible selection to the big game on the West Coast. Stay tuned for more.

Austin Johnson, St. Petersburg (FL): The 6-3 and 215-pound senior has, by most accounts, prototypical size for the next level. Colleges, in fact, have taken serious interest in him of late.

Isaiah Nolan, St. Michael (MN): Determined to succeed, never taking no for an answer, 6-1 and 225-pound senior has proved the naysayers wrong in the past. Don’t count him out.

Nick Stalworth, Clarkston (MI): The 5-11 and 215-pound senior has gained momentum on the recruiting circuit and schools from the Mid-American Conference (MAC) are at the forefront.

Kivon Bennett, St. Thomas Aquinas (FL): A Tennessee commit and son of NFL veteran Cornelius Bennett, the 6-3 and 265-pound senior has stepped out from a famous father’s shadows.

Justin Thomas, Spanish Fort (AL): An LSU commit, the offers flooded in for the 6-5 and 255-pound senior. Even with nearby Alabama in the mix, the rival Tigers were able to land him.

Jalen Harris, Desert Ridge (AZ): An Arizona commit, the 6-4 and 210-pound senior is considered by some, unfairly or not, to be on the slender side. Still, he’s a headache for many.

Lamonte McDougle, Deerfield Beach (FL): A one-time Washington State commit, the 6-1 and 295-pound senior could leave one coast for another. Signs point to him success, regardless.

Dayo Odeyingbo, Ranchview (TX): A Vanderbilt commit, the 6-4 and 235-pound senior is athletically gifted and proves as much each and every time that he steps foot out on the gridiron.

Jermaine McDaniel, Dillon (SC): An Appalachian State commit, the 6-3 and 225-pound senior had been in contact with the Big 12 Conference and interest in him could pick up once again.

Tanner Sundt, Farmington (MN): A North Dakota State commit, the 6-4 and 240-pound senior had his eyes on the All-American Combine (Minnesota Regional), until plans unfortunately fell through.

Garrett Flanary, Lincoln Christian (OK): A Tulsa commit, the 6-2 and 275-pound senior was approached by many programs. In the end, however, playing in his own backyard was important.

Greg Rogers, Arbor View (NV): With 25-plus major offers, the 6-4 and 298-pound senior was the premier prospect on hand at the last two All-American Combines (Las Vegas Regional).

Joshua Paschal, Good Counsel (MD): Seemingly all the big boys are interested in a commitment from the 6-5 and 255-pound senior, including Alabama, Notre Dame and Ohio State.

K.J. Jenkins, Auburndale (FL): The 6-3 and 230-pound senior is on the wish list of several schools in the SEC, more to the point, we’re talking about LSU and Tennessee.

Deon Pate, Fleming Island (FL): Difficult to deal with, particularly from the edge, the 6-3 and 240-pound senior has caught the attention of many colleges and close to 10 have offered.

Jackson Block, Columbine (CO): The 6-3 and 225-pound senior certainly takes care of business on and off the field. Rest assured, colleges are interested in both his ability and character.

Tyrekus Birch, Wichita South (KS): The 6-4 and 215-pound senior opened up eyes of scouts and coaches during the series of All-American Combine (Heartland and Southwest Regionals).

Jordin Linn, Neodesha (KS): Contacted with several programs from the Big-12 Conference, perhaps most notably Kansas State, the 6-2 and 280-pound senior is heading down right path.

Jordan Jackson, Bishop O’Dowd (CA): The 6-3 and 235-pound senior has multiple offers. In the last month though, interest has increased, especially from schools in the Pac-12 Conference.