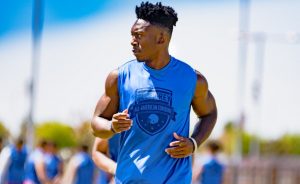 Big Sky Conference target Xamoi Penn was among the many prospects at the Blue-Grey All-American Combine (Desert Regional).

Back again, for yet another year, Mark McMillian and his NFL veteran coaching staff returned for the Blue-Grey All-American Combine (Desert Regional).

Once there, with assistants George Martinez and Jerome Daniels, McMillian & Co. gave back to the game that gave them so much in the not so distant past.

The winners, naturally, were the individuals on hand at the facility for the Arizona Cardinals. That said, here’s a much closer look at some of the highlights.

Keegan Freid, QB, Sunrise Mountain (AZ): The 6-3 and 175-pound junior did his best to stand out in the crowd. Accordingly, UNLV reached out not long ago.

Gabe Friend, QB, Basha (AZ): The 6-2 and 180-pound sophomore seems to be headed down the right path. So is Matthew Purnell from Desert Ridge (AZ).

Xamoi Penn, RB, Sunnyslope (AZ): The 5-11 and 185-pound junior took advantage of the opportunity in front of him. Northern Arizona could be in the mix.

Lucas Wright, RB, Desert Ridge (AZ): The 6-2 and 210-pound junior opened up eyes. No surprise, both Stanford and Washington have some expressed interest.

Deavon Crawford, WR, Chaparral (AZ): The 5-11 and 180-pound sophomore, with Pac-12 Conference interest, might turn out to be the best of the bunch.

Jordan Blakely, WR, Foothill (NV): The 6-2 and 171-pound junior did well and has some interest from the Mountain West Conference, specifically Air Force.

Kain Ream, WR, Thunderbird (AZ): Fresno State is among the teams who have contacted the 6-foot and 185-pound junior. Others could soon follow suit.

Kyle Hester, TE, Highland (AZ): The 6-4 and 225-pound junior was seemingly a man among boys. Accordingly, he’s talked with Northern Arizona and UNLV.

Cameron Brown, DB, Casteel (AZ): The 6-foot and 195-pound junior recently landed his first offer from Penn and the bandwagon figures to fill up fast.

Mandrell Garrick, DB, Buena (AZ): The 5-11 and 175-pound junior did a little bit of everything, most of it well, in this setting. Montana has talked with him.

Edward McClendon, DB, Mesa (AZ): Not afraid of anyone, or anything for that matter, the 6-1 and 193-pound junior didn’t back down from challenges.

Aurek Boutte, LB, Palm Springs (CA): The 5-11 and 195-pound junior was as strong as they come. Once his speed catches up with his strength, watch out.

Andres Finlayson, LB, Williams Field (AZ): Eager to prove himself, the 5-10 and 215-pound junior earned respect, along with Greg Allie from Pinnacle (AZ).

Roman DeWys, OL, Basha (AZ): junior Northern Arizona, Northern Colorado and UNLV are among those on the bandwagon of the 6-5 and 290-pound junior.

Alex Beringer, OL, Sumner (WA): With feelers from schools in the Big Sky Conference, the 6-3 and 295-pound junior has a bright future ahead of them.

Michael Zipprich, DL, North Pointe Prep (AZ): The 6-4 and 225-pound junior certainly passed the eye test and established that he was more than just a big body.

Kody McPherson, DL, Empire (AZ): Never one to back down from a challenge, the 6-2 and 255-pound junior was intense, as was Zeke Gravitt from Empire (AZ).