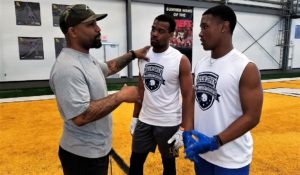 Similar to year’s past, NFL veteran Arlen Harris gave back to the game and was among several of the lead instructors on the campus of Missouri Western State University.

No surprise either, especially given the track record of overall talent in the not so distant to past, there were plenty of highlights. That said, it’s time to take a closer look at things.

Abraham Hoskins, QB, Omaha Central (NE): The 6-foot-2 and 175-pound junior has an offer from South Dakota State. We wouldn’t be surprised to see Nebraska come on strong.

Joe Campbell, QB, Raytown (MO): Kansas and Kansas State seem to believe in the skill set of the 6-foot and 190-pound junior. Rightfully so given the effort in this environment.

Elliott Brown, QB, Elkhorn South (NE): The 6-1 and 185-pound junior was a natural-born leader and had a strong arm. Drew Huff from Mineral Wells (TX) deserved a mention.

Tre’on Fairgood-Jones, RB, Omaha North (NE): Nebraska and Wyoming are among teams in the running for a potential commitment from the 5-11 and 175-pound junior.

Ke’Shawn Turner, RB, Liberty North (MO): A big body, with another gear too, the 6-2 and 215-pound junior has been in contact with Arkansas State and Illinois State.

Nahshon Rick, RB, Blue Springs South (KS): The 5-10 and 180-pound junior did it all, both on the ground and in the air. Missouri State and North Dakota are on the radar.

Austin Hollins, RB, Lawrence (KS): With a somewhat recent visit to Kansas on his resume, the path to success seems to be particularly clear for the 6-1 and 180-pound junior.

Jaylon Walker, RB, Omaha Bryan (NE): South Dakota and Wyoming could be a pair of many possible landing spots at the next level for the 5-11 and 218-pound junior.

Jamar Martin, RB, Wichita Northwest (KS): The 6-foot and 175-pound junior was on campus at Kansas and Oklahoma in the not so distant past. That’s a good start, to be sure.

Andrew Stephens, RB, Lawson (MO): The 5-9 and 190-pound junior did well and could have plenty of options at the next level. Sooner rather than later, too.

Jaylon Roussell, RB, Omaha Burke (NE): A Big Ten Conference target, with Nebraska as a potential option, the 6-1 and 180-pound junior appears to have a bright future.

Luke Grimm, WR, Raymore-Peculiar (MO): Perhaps no one impressed as much as the 6-foot and 175-pound junior. Kansas State and Wyoming are on his list.

Josh Becton, WR, Schlagle (KS): The 5-8 and 155-pound junior has had feelers from the likes of Illinois State and Southern Illinois. Keep an eye on those situations.

Deangelo Davis, WR, University City (MO): A visit to campus with Arkansas built confidence for the 5-11 and 170-pound junior. Now, he must sustain the momentum.

Kyle Taylor, WR, St. Charles Lutheran (MO): A pleasant surprise, the 5-8 and 160-pound freshman proved that he belonged on the big stage. The lights were not too bright.

Ty Lindenman, WR, Shawnee Mission Northwest (KS): The 5-7 and 150-pound junior went out and proved the naysayers wrong. Forget about size, he had heart and skill.

C.J. Horton, WR, Fort Scott (KS): Perhaps best suited to line up at tight end, the 6-6 and 195-pound junior has a fair amount of skill. Blocking will be the key moving forward.

Blake Anderson, OL, Skutt Catholic (NE): On the roster, yet unavailable, still with plans to attend another workout, he has offers. Iowa and Nebraska are in the mix.

Kel Stroud, OL, Chapman (KS): Kansas State and South Dakota, either one really, just might be ideal place to call home in the future for the 6-5 and 265-pound junior.

Josh Hull, OL, Humboldt (KS): Great frame, great attitude, there was plenty to like about the 6-6 and 250-pound junior. Remember his name, you heard it here first.

Jayden Oquendo, OL, Maranatha Christian Academy (KS): Not intimidated, the 6-2 and 265-pound freshman played with the poise of an experienced start on varsity.

William Jeffries, OL, North Callaway (MO): The 6-4 and 285-pound junior was a force to be reckon with in the trenches, so was Cody Crump from Warrenton (MO).

Andrew Jarvis, OL, Piper (KS): The 6-5 and 275-pound sophomore held his own, with Wyatt Roberts from Nebraska City (NE) and Ryan Gimbert from Olathe West (KS).

Timmy Muxo, DB, St. Mary’s (MO): The 5-9 and 180-pound junior did not back down from anyone or anything. Southern Illinois and Tennessee-Martin are on the board.

Keith Jackson, DB, St. Charles Lutheran (MO): Eager to see how he measured up against some of the best around, the 5-11 and 165-pound sophomore got the job done.

Orie Gorse, DB, Arvada West (CO): Fast and physical, the 5-10 and 170-pound junior caused problems in the secondary, along with Dallas Williams from De Soto (KS).

Clay Griffin, LB, Oak Grove (MO): South Dakota State is just one among a handful of schools to express varied levels of interest in the 6-2 and 203-pound junior.

D’Anthony Cribbs, LB, Omaha North (NE): There would be nothing wrong if the 5-9 and 195-pound junior secured an offer to South Dakota. Let’s see what happens.

Mason Thrash, LB, McPherson (KS): If, and when, there was an opportunity for the 6-2 and 205-pound junior to stay close to home at Kansas, he’d likely take it.

Ben Adelsberger, LB, Liberty (MO): Programs in the Ohio Valley Conference, with Murray State at the forefront, the 5-11 and 218-pound junior is in good shape.

Drew Edwards, LB, Osage (MO): With a motor that did not stop, and only one gear, full-speed ahead, the 6-1 and 195-pound junior certainly left a lasting impression.

Ruben Lenker, LB, Webb City (MO): The 6-foot and 170-pound junior earned the respect of many. Timirance Adams from Shawnee Heights (KS) was in same category.

Brandon Lane, DL, St. Michaels (MO): Regardless of position, the 6-5 and 250-pound junior might have been best of the bunch. Iowa State and Missouri are in the mix.

Brayden White, DL, Louisburg (KS): The 6-4 and 270-pound junior played some offensive line, but could find a home on defense. Kansas and Kansas State are interested.

Ben Haynes, DL, Papillion La Vista (NE): The 6-2 and 265-pound junior has some tools to work and it’s only a matter of time before colleges turn their attention toward him.

Damian Ilalio, DL, Manhattan (KS): Young and raw, perhaps a bit inexperienced, or so it seemed at first, the 6-2 and 240-pound sophomore nearly stole the show.