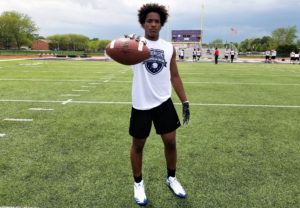 At times in the recent past, and often unfairly so truth be told, there seemed to be a preconceived notion about there not being enough talent in the Midwest.

That’s about to change, however. Especially after word starts to spread about the efforts put forth at the Blue-Grey All-American Combine (Illinois Regional).

NFL veteran Arlen Harris can vouch for the level of skill in attendance at the workout, along with fellow one-time professionals Sean Cattouse and Keith Otis.

Accordingly, and without further ado, here’s much-needed insight on the individuals who went out and impressed when given the all-important opportunity.

Paxton DeLaurent, QB, Camdenton (MO): The 6-5 and 181-pound junior passed the eye test. Arkansas State and Western Illinois are in the mix.

Cameron Mayes, QB, Walsh Jesuit (OH): With an offer from Valparaiso, and interest from Columbia, the 6-1 and 185-pound junior appears destined to play on Saturdays.

Raef Burke, QB, Westville (IL): The 6-1 and 175-pound junior has been on campus at Old Dominion and it would not be a surprise to other schools soon follow suit.

Devin Wills, RB, Mascoutah (IL): Quick and fast, the 5-10 and 195-pound junior had another gear. Once heading North and South, there was no stopping him.

Quincy Johnson, RB, Chaminade-Julienne (OH): A bigger back, stronger than many, with good hands, the 5-10 and 185-pound junior also proved to be elusive.

Devin Johnson, WR, Springfield (OH): The 5-11 and 170-pound junior is a target of teams in the Mid-American Conference (MAC), most notably Bowling Green.

Jaylen Ford, WR, Belleville East (IL): On the roster, with plans for a different workout, the 6-foot and 160-pound sophomore is on the radar of Ball State and Indiana State.

Dawson Frydenlund, OL, West Salem (WI): Big and strong, somewhat surprisingly agile for his frame, the 6-4 and 275-pound junior got the job done in the trenches.

Jack Walsh, OL, Fremd (IL): No stranger to contact, more physical the better, the 6-4 and 280-pound junior was ready to go once the one-on-one session started.

Carter Smith, OL, Villa Grove (IL): Good feet, strong and improving upper body, the 6-5 and 265-pound junior was not intimated by anyone, or anything for that matter.

Connor Holten, OL, Columbia (IL): On one of the biggest stages around, with all eyes on him, the 6-2 and 265-pound junior figured out a way to shine in the spotlight.

Zane Sorensen, DB, University (IL): No stranger to the setting, familiar with how things operate, the 6-foot and 170-pound junior strengthened a growing reputation.

Kameron Yancey, DB, Webster Groves (MO): Ball State, and or Illinois State, among the other programs, could be potential landing spots for the 5-9 and 185-pound junior.

Spencer Parker, LB, University (IL): Teams from the Big 12 Conference have communicated with the 6-3 and 185-pound junior and Iowa State could be final destination.

Jack Wardzala, DL, Roncalli (IN): Missouri Valley Football Conference and Mid-American Conference, both seem to have sights set on the 6-1 and 225-pound junior.

Jeremiah Pittman, DL, Saint Viator (IL): Regardless of position, or class distinction, the 6-2 and 255-pound junior might possess the most upside of everyone.

Grant Gerber, DL, Eau Claire Memorial (WI): Similar to Pittman, once an upperclassman, the 6-2 and 225-pound sophomore will have plenty of college options.

Dan Settimi, DL, Hononegah (IL): Tough and determined, the 6-3 and 235-pound sophomore was an absolute handful, as was Avery Hull from Horace Mann (WI). 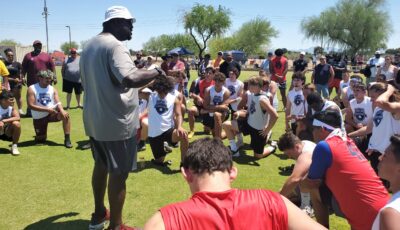