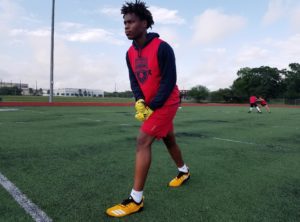 In terms of NFL veteran coaching staffs on the national level, the collection of talent was nearly unmatched during the Blue-Grey All-American Combine (Houston Regional).

NFL veteran trainer Rodney Beasley was lead instructor and joined by colleague Reggie Young, along with NFL veterans Chris Taylor and Michael Ray Garvin, among others.

Given the opportunity to workout in front of the one-time professionals, several individuals left a lasting impression on the powers that be. Without further ado, here’s some insight.

Montrell Bolton, QB, Klein Oak (TX): The 6-3 and 205-pound junior has been in communication with Southland Conference, and no real surprise, Central Arkansas is at top of the list.

Quincy Ivory, QB, Legacy (TX): Big and strong, quick and fast for his size as well, the 6-4 and 210-pound junior grabbed everyone’s attention. All eyes were on him.

Luke Pardee, QB, Klein Cain (TX): On the roster, but unavailable, the 6-1 and 190-pound junior has plans for another workout, with Jacob Bordovsky from St. Joseph (TX).

Braelon Bridges, RB, Klein Collins (TX): A target of teams in Conference USA, perhaps most notably Tulsa, the 5-10 and 175-pound junior turned in an impressive effort.

Thomas Williams, RB, Airline (LA): The 5-11 and 198-pound junior has received varied levels of interest from schools such as Louisiana-Lafayette and Stephen F. Austin.

Milton Jones, RB, Seven Lakes (TX): The 5-11 and 170-pound sophomore could land with a program in the American Athletic Conference, with Houston in the mix.

Jacory Lee, RB, Elkins (TX): A blur, speedy and quick, shifty and elusive, the 5-7 and 186-pound junior was untouchable, at times. Seemingly no one could keep up with him.

Jaylon Coleman, WR, Houston Second Baptist (TX): Baylor and Houston are on the bandwagon of the 6-2 and 195-pound junior. That said, an offer could soon materialize.

Reggie Brown, TE, Legacy (TX): The 6-3 and 240-pound junior already has double-digit scholarships in place, worth noting, he total just might approach 20-plus.

Kenneth Cobb, OL, La Marque (TX): The 6-4 and 265-pound junior was a man among boys down deep in the trenches. He strengthened a growing reputation as a result.

Anthony Wilson, OL, Rains (TX): When all is said and done, by the time his senior season rolls around, the 6-5 and 280-pound sophomore could be close to a finished product.

Zack Holm, OL, Central Catholic (TX): The 6-3 and 308-pound junior was handful to deal with. The same thing can be said about peer Alexander Howard from University (TX).

Isaiah Chambers, DB, Legacy (TX): Fast and physical, up to the challenge each and every time, the 6-2 and 170-pound junior was on the winning end of multiple exchanges.

Seth Johnson, DB, Westfield (TX): Young, on paper that is, the 5-9 and 160-pound sophomore played with the poise of an upperclassmen. Ready for varsity, watch out.

JaShawn Nickerson, DB, Wharton (TX): The 5-8 and 170-pound junior held his own, with Eamon Perry from Cypress Lakes (TX) and Davondrick Crowe from Kilgore (TX).

Luke Arias, LB, Columbia (TX): With just about everything you look for from someone at the second level the 5-11 and 220-pound junior is destined to play on Saturdays.

Jacoby Graham, LB, Morton Ranch (TX): With a bright future ahead, the 6-1 and 190-pound sophomore has been on campus at Texas A&M. Things are getting interesting.

Aven Shelton, DL, Houston Lamar (TX): Big and strong, fast and athletic, the 6-3 and 230-pound junior rarely was stopped, particularly when coming off of the edge.

Trejuan Holmes, DL, Mayde Creek (TX): The 6-2 and 220-pound junior could land with a school in the Southland Conference. Lamar would make a good fit for everyone.

Michael Cobbin, DL, Lamar Consolidated (TX): The 6-3 and 270-pound junior was disruptive, as was N’Namdii Cohen from Elkins (TX) and Micah Marcel from Westside (TX).