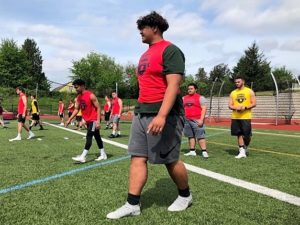 In terms of debuts on the nationwide circuit, they don’t get much better or better than the Blue-Grey All-American Combine (Pacific Northwest Regional).

The workout was a success, to be sure, largely thanks to the efforts of NFL veteran Mark McMillian and a staff spearheaded by CFL veteran Ritchie Martin.

What follows now is a closer look at the many individuals who left a lasting impression on the powers that be, naturally speaking McMillian, Martin & Co.

Michael Franklin, QB, Eastside Catholic (WA): The 6-foot-1 and 180-pound junior was in a class all his own, most times. A Pac-12 Conference target, all signs point to the future being bright.

Tre Martin, QB, Oregon City (OR): The 6-2 and 200-pound sophomore opened eyes and has offers from Penn and Harvard. Montana and Oregon State are in the mix too. Remember his name.

Damir Collins, RB, Jefferson (OR): The 5-9 and 185-pound sophomore has a scholarship from Eastern Washington. Fresno State and San Jose State are players as well.

Ryan Franklin, WR, Skyline (WA): The 5-10 and 165-pound freshman had upside, with Jordan Sims from Mountlake Terrace (WA) and Devyn Grafton from North Medford (OR).

Trayton Laustalot, WR, University Prep (CA): The 6-3 and 180-pound junior did well, with Connor Wolfe from West Albany (OR) and Kaleb Boomer from Tillamook (OR).

Caadyn Stephen, OL, Camas (WA): With several offers on the table, from schools all over, the 6-5 and 280-pound junior certainly strengthened his growing reputation.

Lysander Moeolo, OL, Timberline (WA): A Mountain West Conference target, the 6-4 and 325-pound sophomore could end being the best of the bunch. Just watch.

Jacob Williamson, OL, Chimacum (WA): Big and strong, the 6-5 and 270-pound junior grabbed attention. Johnny Nomani from Tigard (OR) was in the same kind of category.

Roshellio Sanders, DB, Roosevelt (OR): The 5-10 and 180-pound junior was on the official roster, but unfortunately, not on hand. He plans to attend another workout.

Timon Davis, DB, Grant (OR): Fast and physical, never one to back down from a challenge, the 5-9 and 165-pound sophomore went out and earned respect of his peers.

Oge Feo, LB, Bethel (WA): Well on his way to a fair amount of success at the next level, the 6-foot and 215-pound sophomore has been on campus at nearby Washington.

Zach Slail, DL, Southridge (OR): An intimidating presence, who backed it up with steady production, the 6-3 and 280-pound junior was up to the task in the environment.

Luka Sarac, DL, Oak Park (CA): The 6-1 and 200-pound junior would not be denied and seems bound for success on Saturdays, along with Damien Tom from Escalon (CA).

Tim Sellars, DL, Olympia (WA): The 6-3 and 240-pound junior was a force to be reckon with down in the trenches. Sermon Wilson from Puyallup (WA) got the job done too.