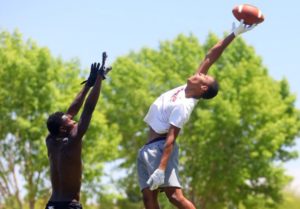 With life on the road for the nationwide series of workouts soon coming to an end, essentially the best was saved for last at the Blue-Grey All-American Combine (Las Vegas Super).

Several NFL veterans served as the lead instructors. Also, giving back to the game as assistants were one-time professionals Byron Evans, George Martinez and Reggie Young.

After a couple of thorough meetings following the two-day events, here’s a comprehensive list of individuals who left last impression on the coaching staff that was in attendance.

Budd Bernie, QB, Riverside Poly (CA): The 6-foot and 170-pound senior was seemingly in control from start to finish. Chris Bradley from Cahokia (IL) also did well in the setting.

Jamar McFarlane, RB, Kofa (AZ): A good fit for the 5-9 and 178-pound senior could be within the Big Sky Conference, with nearby Northern Arizona serving as a landing spot.

Damian Crawford, RB, Ginn Academy (OH): Running up the middle or to the outside, catching the ball out of the backfield, the 6-foot and 197-pound senior can do it all.

Jamie Guinn, RB, Monett (MO): Quick and fast, more so than many of his peers in the environment, the 6-foot and 190-pound senior grabbed the attention of many onlookers.

Roosevelt Cage, RB, Jefferson (MN): In time, with a bit more maturity and most likely when it’s time to graduate, the 5-10 and 195-pound junior figures to have many options.

Damani Wilks, WR, Del Sol Academy (NV): It seems as if Weber State is among those out in front for a possible commitment from the 6-1 and 165-pound senior. Watch out.

Trey Blackford, WR, Tri-City Christian (CA): Somewhat undersized now, but with a growth spurt in the works, the 5-9 and 155-pound junior proved that stature did not matter.

Vili Hafoka, OL, Tumwater (WA): Northern Colorado was first to jump on bandwagon with an offer for the 6-4 and 293-pound senior. BYU might be in the mix soon, too.

Eddie Weigl, OL, Desert Vista (AZ): Northern Arizona was one school to recently reach out to the 6-3 and 305-pound senior. We wouldn’t be surprised to see an offer materialize.

Justin Curtis, OL, Hart (CA): An underclassman on paper, yet someone who played with the experience of a varsity starter, the 6-4 and 290-pound junior held his own.

Anthony Perna, OL, Faith Lutheran (NV): The 6-5 and 265-pound junior is heading down the right path and the same thing goes for Justin Littlewolf from Mahnomen (MN).

Rashod Tanner, DB, Moanalua (HI): Either or, in the Big West Conference or Mountain West Conference, both places could be called home for the 5-9 and 160-pound senior.

Kyron Samuels, DB, Phoenix Alhambra (AZ): Fast and physical already, also just now coming in to his own, the future appears bright for the 6-1 and 179-pound junior.

Bryan Juarez, LB, Del Sol Academy (NV): Southern Utah remains in constant contact with the 6-2 and 188-pound senior and he could make an immediate impact.

Gavin Ware, LB, Tooele (UT): Good character, on and off the field worth noting, the 6-2 and 185-pound senior earned the respect of his peers and counterparts, alike.

Oge Feo, LB, Bethel (WA): With interest from the Pac-12 Conference, when all is said and done, the 6-foot and 180-pound junior could be the best of the entire bunch.

Mark Vander Woude, LB, Beaumont (CA): Tough and determined, willing to take on anyone or anything, the 5-10 and 170-pound junior was a favorite of the coaching staff.

Isaac Lees, DL, Snow Canyon (UT): Unstoppable, that was on more than one occasion too, the 6-3 and 270-pound junior was disruptive down deep in the trenches.

Xavier Cousar, DL, Northwood (CA): Strong, physically intimidating, yet with some surprising athleticism, the 6-2 and 272-pound senior took a big step toward the next level.

Luka Sarac, DL, Oak Pak (CA): Sacramento State and San Jose State have sights set on the 6-1 and 225-pound senior. One could pull the trigger on a scholarship for him.

Matthew Burba, DL, Huntley (IL): A technician, a bull in a china shop with brutish strength to match, the 6-foot and 250-pound senior has plenty of upside. Remember his name.