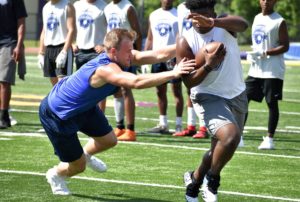 In terms of debuts, with many of them coming on the nationwide circuit and often on yearly basis, they don’t get much better than the Blue-Grey All-American Combine (Louisiana Regional).

As expected, NFL veteran trainer Rodney Beasley was the lead instructor. Worth noting, afterward he had nothing but good things to say about the workout, both staff and athletes included.

In the end, however, the real winners were the many individuals in attendance. Accordingly, what follows is a much closer look at those who left a lasting impressions on the powers that be.

Josh Bailey, QB, Fontainebleau (LA): The 6-foot-4 and 200-pound sophomore has plenty of tools to work with and could be a near finished product in a couple of years.

Dillon Monette, QB, Southside (LA): The 6-foot and 165-pound sophomore was not intimidated on the big stage. He did just fine in the spotlight, for the record.

D’Ante’ Gallashaw, RB, Leesville (LA): Lamar, McNeese State and Tulane are a few of the programs who appear to be on the bandwagon of the 5-9 and 183-pound junior.

Orenthal Lewis, RB, Lake Charles College Prep (LA): Strong and compact, also low to the ground and deceptively fast, the 5-9 and 220-pound junior has some upside.

Tremell Withrow, WR, West Jefferson (LV): The 6-1 and 160-pound junior looked the part. More often than not, he played the part, too. Don’t forget. Remember the name.

Malik Nabors, WR, Comeaux (LA): The 6-1 and 182-pound sophomore held his own, as did Devant’e LeBlanc from Donaldsville (LA) and Troy Hall from Pineville (LA).

Mason Givens, OL, Franklinton (LA): Seemingly a man among boys at times, the 6-6 and 325-pound junior was a force to be reckon with down in the trenches.

Michael Moton, DB, Huntington (LA): With a good f rame, and a growth spurt in the works as we speak, the 6-foot and 160-pound junior seems destined for success.

Kenderick Eugene, DB, Bonnabel (LA): The 5-8 and 160-pound junior did not back down from challenges, same thing can be said about Isaiah Roberson from DeRidder (LA).

Nicholas Picard, LB, Lafayette Christian Academy (LA): A target of teams in Conference USA, including Tulane, the 6-foot and 210-pound junior has a bright future ahead.

Alex Blundell, LB, Jonesboro-Hodge (LA): The 6-foot and 220-pound junior has been in contact with Louisiana-Monroe and Louisiana Tech, among other schools.

Ja’Marian Peterson, DL, De La Salle (LA): When all is said and done, the 6-2 and 230-pound sophomore might turn out to be best of the bunch on the defensive side.

Editor’s Note: Many of the recruits above will soon receive an invite to one of the upcoming All-American Combines (Super Regional level), each held nationwide at NFL venues or college facilities. 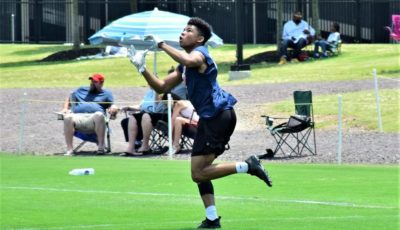