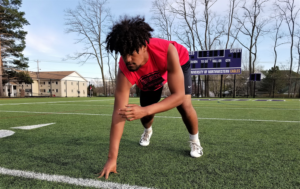 Year in, and year out, the Blue-Grey All-American Combine (Northern Regional) grows by leaps and bounds, seemingly. This time around was no different from so many of the others.

NFL veteran trainer Reggie Young was lead instructor, similar to recent memory, and joined by the likes of the brand’s All-American Bowl alumni such as Jose Caro and Zakk Ryherd.

What follows is a much-needed closer look at the individuals in attendance who left a lasting impression on the powers that be, including the coaching staff in place and administrators.

Marquise Gleb, QB, South St. Paul (MN): Still young, yet with plenty of upside, the 6-foot-1 and 190-pound sophomore might turn out to be the best of the entire bunch. Remember his name.

Cale Wolf, QB, Pequot Lakes (MN): The 6-4 and 210-pound junior looked the part. And played the part, at times. Bottom line, without question, he’s heading in the right direction.

Quintcy Suggs, RB, Eastview (MN): The 5-10 and 185-pound junior has been in communication with the likes of North Dakota State and South Dakota State. An offer could follow.

Shawn Shipman, RB, Champlin Park (MN): The 5-11 and 185-pound sophomore has connections in the Big 12 Conference. Given time, a scholarship could materialize for him.

Josh Buri, RB, Stewartville (MN): The 5-11 and 210-pound sophomore could land with a school in the Sun Belt Conference, with Louisiana-Lafayette firmly in mix at this stage of the game.

Luke Zardzin, RB, Prospect (IL): The 6-1 and 185-pound sophomore has talked with teams in the Ohio Valley Conference. Worth noting, Eastern Illinois is at, or near, top of the list.

Da’Mari Porter, WR, Blaine (MN): North Dakota State and Northern Iowa, among others, have jumped on the proverbial bandwagon of the 6-3 and 195-pound junior. Rightfully so.

Keagan Mann, WR, St. Michael-Albertville (MN): A big target, particularly down around the red zone, the 6-3 and 200-pound junior has tools to work with, perhaps at tight end as well.

Aidan Lowery, OL, St. Paul Minnehaha Academy (MN): The 6-7 and 330-pound junior could end up with a program from the Missouri Valley Football Conference or Ivy League.

Viliami Hafoka, OL, Tumwater (WA): Montana and Weber State could be options for the 6-4 and 290-pound junior. Can’t forget about BYU being another possible destination.

Shea Albrecht, OL, Orono (MN): With a high ceiling, it’s no surprise to learn that the 6-4 and 270-pound sophomore has been in contact with Minnesota and Nebraska.

Luke Weierke, DB, Farmington (MN): The 6-foot and 190-pound junior was able to shut down one side of the field, essentially. Not an easy task given the collection of talent.

Datelle Straub, DB, Henry (MN): A competitor, willing to take on anyone and anything, the 6-foot and 170-pound junior won more exchanges than he lost in this environment.

Jarrett Gronski, DB, Superior (MN): Though he took snaps at quarterback, the 6-1 and 189-pound junior is an athlete. Accordingly, he could find a home in the secondary or at backer.

David Murray, LB, Johnson (MN): The 6-foot and 230-pound junior opened up plenty of eyes, along with Eddie Baker from Stewartville (MN) and Mitch Vener from South St. Paul.

Pierce Oppong, DL, Bloomington Jefferson (MN): The 6-3 and 230-pound junior nearly stole the show. North Dakota, South Dakota and Wyoming are in the mix for a potential pledge.

Drake Teal, DL, St. Paul Johnson (MN): The 6-4 and 215-pound junior was difficult to deal with off the edge. North Dakota, South Dakota and Northern Iowa are all players.

Hayden Johnston, DL, Albert Lea (MN): Despite not being at full strength, the 6-3 and 260-pound junior was impressive. North Dakota State and South Dakota State are on the radar.