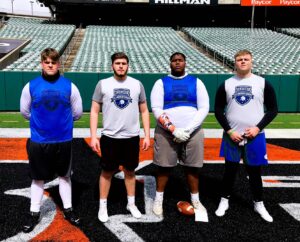 The scene was set, like so many times before, Cincinnati Bengals’ Paul Brown Stadium once again hosted the Blue-Grey All-American Combine (Midwest Regional) and the workout received rave reviews.

NFL veteran Ken Stills was the lead instructor, similar to the many year’s past. Ohio State alumni John Holman was also in attendance to help out. For each of them, it was all about giving back to the game.

Mitchell Irwin, QB, 2023, Portsmouth West (OH): The 6-foot-1 and 185-pounder has talked with the Ivy League, namely Dartmouth and Princeton. Eastern Kentucky might be a player, too.

Troy Martin, QB, 2024, Reynoldsburg (OH): Good size and arm strength, it appears as if the 6-2 and 200-pounder is just now starting to realize his immense potential. Once he figures it out, sky’s the limit.

Damian Roby, QB, 2024, London (OH): Another youngster, in a similar situation mind you, the 6-foot and 175-pounder has a high ceiling. His name is one to remember.

Christian Manville, RB, 2023, New Albany (OH): Miami (OH) and Toledo are among the teams that have expressed varied levels of interest in the 6-foot and 185-pounder.

Amarye Howard, RB, 2023, Wheaton North (IL): The 5-11 and 180-pounder turned some heads. Chris Fogan from Bellefontaine (OH) was in the same kind of category.

Jaden Gilbert, WR, 2023, Elyria (OH): The 5-10 and 175-pounder is on the radar of team such as Akron, Ball State and Eastern Michigan. The list figures to grow, worth noting.

Kristopher Hughes, WR, 2023, Union County (KY): Murray State was one of the first programs to reach out to the 5-11 and 187-pounder, and more recently, Kansas State.

David Coffey, WR, 2024, De La Salle (OH): Capable of playing on both sides of the ball, the 6-2 and 175-pounder was quick and fast, explosive from start to finish really.

Braden Dougherty, TE, 2023, Dublin Coffman (OH): Plenty was expected from the 6-5 and 225-pounder. He delivered, as well. Akron and Kent State seem to like his game.

Aiden Diaz, TE, 2023, Shaker Heights (OH): The 6-2 and 225-pounder has been in some contact with Kent State. Virgina looks to be heading down a similar path with him.

Isaac Clary, OL, 2023, Gallia Academy (OH): Marshall and Virginia Tech seem to have their sights set on the 6-7 and 320-pounder. Rightfully so after his effort in this setting.

Anthony Iliano, OL, 2023, Benedictine (OH): The 6-4 and 275-pounder is a target of many teams, namely Akron, Central Michigan and Kent State. The attention is worthy, too.

James Glover-Tyson, OL, 2023, DeSales (KY): Big, massive, with rapidly developing athleticism, the 6-7 and 375-pounder has the ear of the Ohio Valley Conference. For now.

Mason Fry, OL, 2023, Canal Winchester (OH): A center, the 6-3 and 285-pounder could land with Bucknell or Marshall. He’s destined to play at the next level, regardless.

Jake Wheelock, OL, 2024, Stebbins (OH): Toledo was seemingly the first to jump on the bandwagon of the 6-4 and 280-pounder. Ohio State could soon be a game-changer.

Tremaine Washington, OL, 2023, Fairdale (KY): The 6-3 and 300-pounder opened up more than a few sets of eyes, along with peer Kevin Smith from Upper Scioto Valley (OH).

Blaine Castle, OL, 2023, Upper Scioto Valley (OH): The 6-4 and 265-pounder was a force up front, with Peyton Hicks from Lockland (OH) and Steven Rhodes from Fairland (OH).

Javin Sewell, DB, 2023, Cass Tech (MI): The 5-10 and 173-pounder has multiple offers from the Mid-American Conference (MAC). It’s only a matter of time before he commits.

Nesta Owens, DL, 2023, Chaminade Julienne (OH): The 6-2 and 240-pounder has kept the lines of communication open with the MAC. Cincinnati could jump to the front though.

Justin Moore, DL, 2023, Lucasville (OH): The 6-5 and 260-pounder seems to have established some type of relationship with Ohio and the developing situation is worth monitoring.

Carter Fay, DL, 2023, Lima Shawnee (OH): The 6-5 and 220-pounder got the job done, with Davon’te Courtney from Canal Winchester (OH) and Quinterrius Jemison from Withrow (OH).