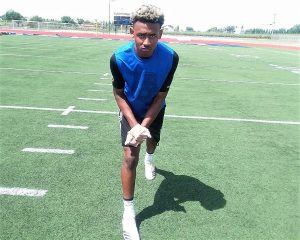 More than a few of the individuals in attendance impressed the powers that be, specifically speaking, McMillian & Co. That said, here’s a look at the standouts.

Taemon Evans, QB, De Anza (CA): Fresno State contacted the 6-foot and 178-pound junior in the past, and based on his effort, the attention was warranted.

Trenton Luera, QB, Clovis North (CA): The 6-3 and 185-pound sophomore, with interest from San Jose State, held his own despite class distinction.

Kyle Claiborne, QB, North Valleys (NV): Some teams in the Big Sky Conference, mainly Montana State, have connected with the 6-3 and 185-pound junior.

Jack Franz, QB, Reed (NV): The 6-2 and 170-pound sophomore wasn’t intimidated by the big stage, nor was underclassmen Eli Brickhandler from Rocklin (CA).

Makai Polk, WR, El Cerrito (CA): The 6-4 and 190-pound junior with multiple sholarships, most notably being Oregon, just might have stolen the show here.

Christian Posey, WR, Hercules (CA): A favorite of the coaching staff by day’s end, the 6-2 and 185-pound junior earned the respect of many, including his peers.

Koby Gross, TE, San Ramon Valley (CA): UNLV has expressed the most interest in the 6-3 and 235-pound junior. Oregon State and Washington State are now in the mix.

Colby Warkentin, TE, Bakersfield Centennial (CA): The 6-5 and 232-pound junior has talked with the likes of Fresno State and Northern Arizona. Let’s see what happens.

Armauni Archie, DB, El Cerrito (CA): Oregon State and Washington State, at this time, are considered among the frontrunners for the 6-1 and 175-pound junior.

Milton Clements, DB, Central East (CA): The 5-10 and 175-pound junior did not back down from anyone, or anything. Same goes for Charles Modeste from Hercules (CA).

Daego Albert, DB, El Cerrito (CA): The 6-1 and 170-pound junior received his first offer from Florida Atlantic. Idaho and UNLV were not far behind either.

Jack Lacy, LB, Pittsburg (CA): Teams from the Big Sky Conference have kept the lines of communication open with the 5-10 and 210-pound junior. Rightfully so, too.

Ernest Jackson, LB, Frontier (CA): The 5-10 and 195-pound junior was a tireless worker. Justin DeWitt from Valley Christian (CA) was in the same category.

Giovanni Spinelli, OL, Pittsburg (CA): A center, the 6-2 and 265-pound junior had a good understanding of what was expected from him and he delivered results.

Gavyn Tobin, OL, Freedom (CA): By the time he’s a senior, the 6-4 and 225-pound freshman could be difficult to deal with. He’s heading in the right direction.

Kameron Barnes, DL, Frontier (CA): Once the 6-3 and 205-pound junior puts on added mass, chances are, schools will start to pursue him a bit more.

Jonathan Sheets, DL, Sobrato (CA): Good size, the 6-3 and 230-pound junior also displayed surprising athleticism. There’s a lot to like about his game.