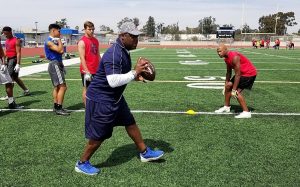 Just like old times, some observers might say, NFL veterans Mark McMillian and Eric Allen were back it. Out on the field, once again. This time around, however, as instructors.

With their playing days behind them, the one-time professionals, now turned coaches, gave back to the game during the Blue-Grey All-American Combine (San Diego Regional).

Worth mentioning, more than a few of the prospects in attendance impressed McMillian and Allen. That said, here’s a closer look at the individuals who left lasting impression.

Chris Venegas, QB, Warren (CA): Forget out measurables, the 5-foot-9 and 170-pound junior was able to stand out in a crowd. Army and Fresno State have been in contact with him.

James Duncan, QB, Classical Academy (CA): Despite being tabbed as young on paper, the 6-4 and 180-pound sophomore often played with the poise of an upperclassman.

Ricky Easterwood, QB, Bakersfield (CA): The 6-1 and 190-pound freshman appears to be heading down the right path. All he has to do is stay on the straight and narrow.

Thomas Kinslow, RB, Centennial (CA): Utah and Washington State are a couple of the Pac-12 Conference programs that are interested in the 5-10 and 185-pound junior.

De’Moryea Polidore, RB, Paramount (CA): No stranger to the setting, and for the second time in less than a month, the 5-8 and 210-pound junior delivered results.

Daelin Degraffenreid, WR, Ridgeview (CA): The 6-1 and 177-pound junior has been on campus of Arizona and Arizona State. More schools figure to follow suit, just watch.

Isaac Jernigan, WR, Bakersfield (CA): With a couple scholarships already in place, the 5-9 and 165-pound sophomore could have 20-plus offers by the time he graduates.

Robbie Colenzo, WR, Warren (CA): The days of flying underneath the radar are coming to an end for the 5-7 and 155-pound junior. He seemingly could not be stopped.

Evan Burkhart, WR, Stockdale (CA): The 5-10 and 170-pound sophomore opened up plenty of eyes. Same thing could be said for Jeremiah Gradowitz from Stockdale (CA).

Jacob Adelman, TE, Patrick Henry (CA): The 6-3 and 200-pound junior certainly passed the eye test. Then, he went out and earned the respect of his many peers.

Cameron Williams, DB, Bakersfield (CA): With double-digit offers, the 6-0 and 200-pound junior was in a class all his own. His name is one to remember, no doubt about it.

Isaiah Jernigan, DB, Bakersfield (CA): Arizona is one of his three offers and all signs point to the whole process is just getting started for the 5-9 and 171-pound junior.

Tyler Kinslow, LB, Centennial (CA): A Pac-12 Conference target for a while now, it’s safe to say that the 5-10 and 185-pound junior will have plenty of options in the future.

Eric Orfanos, LB, San Diego (CA): Montana has been in talks with the 6-foot and 205-pound junior in the recent past. Only a matter of time before he lands first offer.

Hunter Riley, LB, Liberty (CA): The 5-10 and 185-pound junior had a motor that did not stop. It was one gear throughout for him. All gas and no brakes.

Christopher Rivera, OL, Bakersfield (CA): Capable of lining up at center, with loads of upside, the journey has started for the 6-2 and 285-pound sophomore.

Elbert Brown, OL, Bakersfield (CA): Big and nasty, the 6-1 and 250-pound junior didn’t back down from any challenge and won more exchanges than he lost.

Shan Sachdeva, DL, Stockdale (CA): A handful of schools from the Mountain West Conference have taken a liking to the 6-4 and 245-pound junior, specifically UNLV.

Collin Layton, DL, Murrieta Mesa (CA): The 6-1 and 208-pound junior did well from start to finish, along with counterparts such as Isaiah DeLaCruz from Schurr (CA).