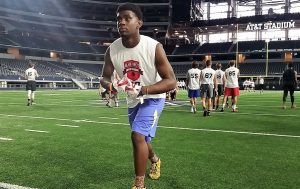 Mountain West Conference target Alex Wise was among the well-known names at the Blue-Grey All-American Combine in Dallas (TX).

In terms of the coaching staff in place and the prospects on the field, there was no shortage of talent at the Blue-Grey All-American Combine (Southwest Super) at Dallas Cowboys’ AT&T Stadium.

As one can imagine, and also mentioned around these parts a few times in the past, the biggest winners were the recruits on hand who had the opportunity to soak in all of the knowledge.

What follows, naturally, is much-needed insight on the individuals who left a lasting impression on the powers that be. To be more specific, McMillian & Co. That said, a closer look follows.

Austin Gunter, QB, White House Heritage (TN): The 6-foot-2 and 195-pound junior has been in contact with teams from the Ohio Valley Conference, namely Jacksonville State.

Porter Johnson, QB, South Whitfield (GA): Schools in the Southern Conference have expressed varied levels of interest, some more than others, in the 6-2 and 197-pound senior.

Kasen Andrews, QB, Calvary Christian (GA): The 6-5 and 205-pound senior looked the part. And played the part. Same things can be said about Colt Gorman from Sinton (TX).

Reese Sila, RB, Shawnee Mission North (KS): All signs point to it only being a mere matter of time before the 6-foot and 208-pound senior emerges on the recruiting radar.

Devin Hembry, RB, Hilldale (OK): The 6-1 and 175-pound junior certainly has a bright future ahead of him. In the meantime, expect to hear more, and more, of his name.

Marcus McGhee, RB, Luverne (AL): The 5-11 and 203-pound senior made an impact, along with Heath Humphreys from Talihina (OK) and Trystan Isley from Nickerson (KS).

Gerquan Sanders, WR, Sapulpa (OK): Programs from the Big 12 Conference have targeted the 6-2 and 172-pound senior and Oklahoma State could be the final destination.

Alex Wise, WR, Brennan (TX): The 6-3 and 190-pound senior recently landed his first scholarship, from Air Force, and other colleges figure to start knocking on his door soon.

Joshua Tips, WR, Trinity Christian (TX): Louisiana Tech is one of multiple Conference USA teams to have kept the lines of communication open with the 6-4 and 185-pound senior.

Eddie Mitchell, WR, Hilldale (OK): The 6-1 and 171-pound senior often made the difficult catch seem to be particularly easy, whether it was on the sideline, underneath or downfield.

Houston Sonnier, WR, Lumberton (TX): A big target, especially down around the red zone, the 6-5 and 230-pound senior grabbed just about every ball thrown in his direction.

Truedale Archer, WR, Douglas (OK): Kansas State is among the several teams in the Big 12 Conference with eyes on the 5-11 and 162-pound senior. Rightfully so, too.

Bryce Andrews, WR, Calvary Christian (GA): The 6-4 and 205-pound senior has a body type that college  coaches and scouts seek. Sky’s the limit, if he remains focused.

Thomas Williams, WR, Hendrickson (TX): Not intimidated on the big stage, the 6-2 and 187-pound senior took advantage of his opportunities and impressed onlookers.

Nick Sharp, WR, Edmond Santa Fe (OK): The 5-10 and 164-pound senior recently received feelers from a couple of different programs and Kansas State was one of them.

Dayson Adaway, WR, Spring Hill (TX): The 6-foot and 170-pound senior went out and got the job done. Khatib Lyles from Franklin (TX) falls in to that category, as well.

Connor Gallagher, WR, Francis Howell North (MO): The 6-foot and 218-pound senior did not back down from any challenge, with Cole De Los Santos from McDonald (MO).

Max Wadding, TE, Flower Mound (TX): It would not come as a surprise to see the 6-3 and 200-pound senior land somewhere in the Patriot League, perhaps with Lafayette.

Jacob Knotts, TE, Barbers Hill (TX): The 6-3 and 200-pound senior did a little bit of everything, most of it well. His efforts, of course, did not go unnoticed in this setting.

Gabriel Sonnier, TE, Lumberton (TX): A couple of years from now, and you heard it here first, the 6-7 and 247-pound junior will likely be a hot commodity for colleges.

LaDre Tabb, DB, Pelham (AL): A Conference USA target, with Alabama-Birmingham (UAB) as a good fit, the 5-11 and 160-pound senior is heading in the right direction.

Scott Valentas, DB, Kapuan Mt. Carmel (KS): The 6-3 and 190-pound junior, perhaps more so than most, increased his stock. He was a clear favorite of the NFL veterans.

Miles Simon, DB, Hibriten (NC): During skills testing, the 6-1 and 186-pound senior caught everyone’s attention. It was more of the same when on-on-ones started.

Noah Haygood, DB, Manvel (TX): The 5-9 and 165-pound junior is just starting to tap in to his immense potential. Once he puts things altogether, watch out for him.

Brayden Mathis, LB, China Spring (TX): As expected, the 6-2 and 215-pound senior was one of the top prospects at his position. Playing on Saturdays is in his future.

Jayce Turner, LB, Anna-Jonesboro (IL): The 5-10 and 197-pound junior has had been in contact with the Missouri Valley Football Conference, notably Southern Illinois.

Giovanni Franklin, LB, Liberty (MO): Not long ago, Kansas reached out to the 6-3 and 225-pound senior. Lining up in the Big 12 Conference is a distinct possibility.

Devontae Hatcher, OL, Stillwater (MN): Drake and North Dakota have their respective sights set on the 6-4 and 300-pound senior. Or so it seems. Stay tuned for more.

Cody Lanning, OL, Ozark (MO): The 6-4 and 260-pound senior took another step on his journey toward the playing on the next level. The path is clear for success, too.

Daniel Ostrovskiy, OL, Francis Howell North (MO): After receiving rave reviews from McMillian, among others, there is nothing stopping the 6-3 and 315-pound senior.

Blake Hollis, OL, Groveton (TX): The 6-4 and 295-pound junior has talked with a number of programs,  with North Texas and Tulane being a couple of the notables.

Griffin Hunt, DL, Lovejoy (TX): The 6-4 and 235-pound senior could end up in the Big 10 Conference considering his somewhat occasional communication with Purdue.

Drake Welch, DL, Wellington (TX): Tough and determined, never one to settle, the 6-4 and 240-pound senior appears to have the tools to make a difference in college.

Cole Todd, DL, Eaton (TX): The 6-3 and 220-pound senior had a motor that did not stop. It was full-speed ahead. All gas and no breaks. Bottom line, he delivered results.

Jace Rogers, DL, Rusk (TX): The 6-3 and 225-pound senior was a force, along with Jake Hernandez from  Eastwood (TX) and Bryce Stavinoha from Scurry Rosser (TX).