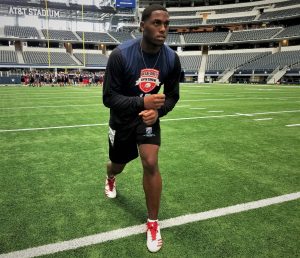 This time was no different than others in the past as NFL veterans Mark McMillian, George Teague, Michael Myers, Sheldon Jackson, Jerrod Black and Reggie Young were impressed.

What follows is a much closer look at the many individuals in attendance who were able to impress the powers that be, naturally the one-time professional coaching staff that was in place.

Cade Bartlett, QB, Waller (TX): SMU and Tulsa are among those on the bandwagon of the 6-foot-3 and 205-pound senior. It’s just a matter of time before others join.

Caleb Gerber, RB, Pebble Hills (TX): The 5-10 and 170-pound senior nearly stole the show and already has a Mountain West Conference offer, that being from Air Force.

Isaiah Johnson, RB, Lubbock Cooper (TX): The 6-foot and 205-pound junior has connections at Texas Tech and Tulsa. He might turn out to be the best of this bunch.

Azaya Patrick, RB, Teague (TX): Big and strong, also with his share of quickness, the 5-11 and 195-pound senior could land with a school from the Patriot League.

Ian Butler, WR, South Houston (TX): North Texas and SMU seem to have their respective sights set on the 6-2 and 195-pound senior. Rightfully so. He can go.

Wes Bagley, WR, Magnolia West (TX): With a chance to gain exposure in the Big 12 Conference, the 6-6 and 200-pound senior took advantage of the opportunity.

Ryan Schmidt, WR, Katy Tompkins (TX): Conference USA target of late, the 6-foot and 185-pound senior was, from time to time, unstoppable in the environment.

Quentin Skinner, WR, Claremore (OK): The 6-2 and 200-pound junior held his own as did Ronnie Thomas from Dekaney (TX) and Jevin Huddleston from Parkview (MO).

Gabriel Sonnier, WR, Lumberton (TX): No stranger to this kind of setting, the 6-6 and 240-pound senior excelled. Programs from Conference USA have reached out.

Noah Fuentes, DB, Clear Falls (TX): In the absence of Matthew Norman of Allen (TX), the 6-foot and 175-pound senior stepped up his efforts and delivered results.

Nate Bryant, DB, Stigler (OK): The 6-2 and 175-pound senior took on anyone, and anything. Similarly, Rosendo Olague from Southwest (TX) was up to the task.

Sterling Henderson, LB, Farwell (TX): Big, strong and versatile, the 6-2 and 245-pound senior could put a hand on ground, if need be and Air Force seems to be interested.

Matt Needham, OL, Houston (TN): Memphis and Tulane are among a handful of programs that seem to believe the 6-6 and 310-pound senior would be a potential good fit.

Garrett Jaster, OL, George Ranch (TX): Texas Southern was first on the bandwagon with an offer for the 6-4 and 315-pound senior. Conference USA teams are now in the mix.

Landon Leger, OL, Cypress Falls (TX): The 6-3 and 305-pound senior has kept in contact with the likes of McNeese State, Memphis and Texas State, to name a few programs.

Chasen Earnhart, OL, Lee-Scott Academy (AL): Strong as they come, the 6-4 and 320-pound senior has been in contact with the Sun Belt Conference, mainly South Alabama.

Clayton Courtney, OL, Columbus (TX): A center, the 6-3 and 280-pound senior turned heads. Paxton Switzer from Cordell (OK) was in a similar category.

Ethan Filio, OL, Frenship (TX): The 6-5 and 305-pound senior was difficult to deal with. The same thing can be said about Nate Caballero from Western Hills (TX).

Carson Holloway, DL, George Ranch (TX): Tulsa is most likely on top of the list for the 6-2 and 250-pound senior. Other schools could knock on his door soon, too.

Dartanyon Cardoza, DL, Gunter (TX): The 6-4 and 225-pound senior has kept the lines of communication open with Sam Houston State. Things figure to get interesting.

Jackson Bussey, DL, Scurry-Rosser (TX): A Southland Conference target, the 6-3 and 225-pound senior does a little bit of everything. Most of it very well, in fact.

Burton Schindler, DL, Kapuan Mt. Carmel (KS): The 6-2 and 215-pound senior tested off the charts during skills testing and also did well once the one-on-ones started.

Dain Warnick, DL, Alvord (TX): The 6-4 and 245-pound senior did back down from any challenges in the trenches, same with Brandon Laird from Scurry-Rosser (TX).

Wade Sharp, DL, Newcastle (OK): The 6-4 and 225-pound senior was surprisingly fast, particularly so given his above-average frame. He has plenty of potential.