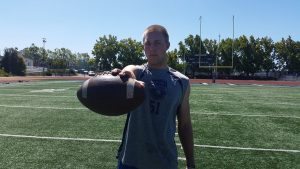 Ball State commit Tyler Vander Waal was among the many well-known recruits at the recent Blue-Grey All-American Combine in Oakland (CA).

All good things must come to an end, unfortunately at times, and such was the case over the weekend as this year’s nationwide series of workouts wrapped up with the Blue-Grey All-American Combine (West Coast Super) in Oakland (CA).

The brand went out with bang in the finale with NFL veterans Mark McMillian and Dante Marsh, NFL trainer Reggie Young, along with one-time NFL assistant coaches George Martinez and Artie Gigantino, leading the way as instructors.

In terms of talent on the field, many of the West Coast’s more promising prospects were in attendance, mixed in with some of the nation’s rising recruits. That said, here’s a closer at the individuals who left a lasting impression.

Tyler Vander Waal, QB, Christian Brothers (CA): A recent Ball State commit, the 6-foot-4 and 215-pound senior was without question the top player at his spot, and arguably, the best overall regardless of position.

Richard Kirbyson, QB, De Anza (CA): The 6-3 and 185-pound senior was not a stranger to the workout’s setting, having been in the environment before. As expected, he held his own.

John Bell, QB, Sobrato (CA): Still raw, and largely inexperienced, on paper, the 6-4 and 190-pound junior played with the poise of a varsity veteran. No easy task, given the competition.

Ricardo Hill, RB, Bonanza (NV): The 5-11 and 180-pound senior captured the attention of many with an eye-opening skills testing effort and there was no drop-off during one-on-ones.

Tre Hart, WR, Chandler (AZ): An underclassman with loads of upside, the 5-11 and 165-pound junior has a bright future. It’s only a matter of time before colleges jump on the bandwagon.

Conner McKenzie, WR, Red Bluff (CA): The 5-9 and 160-pound junior gave opponents in the secondary fits throughout. Southern Oregon and UNLV remain in constant contact with him.

Zachary Hartsfield, WR, Centennial (CA): A favorite of the signal-callers, the 6-3 and 195-pound junior did a good job. Same thing can be said about Jarod Zimmerman from Highland (AZ).

Maurice Gaines, DB, Folsom (CA): The 6-1 and 175-pound junior was a late addition, but certainly worth the wait. Worth mentioning, by day’s end, he was named as the Defensive MVP.

Bryson Toles, DB, Damonte Ranch (NV): In the running for numerous individual accolades, the 6-3 and 185-pound senior didn’t appear to be deterred by the hype that surrounded him.

Jayson Johnson, DB, Durango (NV): The 5-11 and 170-pound senior proved the naysayers wrong with a focused effort here. Mikhail Sands from Prairie View (CO) was in the same boat.

Charles Walker, LB, Millennium (AZ): The 6-2 and 230-pound senior might have been a relative unknown on the whole recruiting landscape. That perception, however, is about to change.

Scott Bonham, LB, Desert (CA): A newcomer, of sorts, to workout circuit, the 6-1 and 200-pound senior fit in right away. The transition was smooth and that bodes well for the future.

Jaden White, LB, Mt. Juliet (TN): The 6-1 and 200-pound senior made the long road trip worthwhile and endeared himself to the entire coaching staff before all was said and done.

Domonic Barandica, LB, Gregori (CA): An example to his peers, both on and off the field, the 6-foot and 215-pound senior was a leader. Some players have it, like him. Others don’t.

Dylan McCreery, OL, Valley Christian (CA): The 6-3 and 317-pound senior was as intense as the come. To name a couple, Boise State and Colorado are current fans of his determination.

Kevin Williams, OL, Omaha North (NE): A man among boys at times, the 6-5 and 305-pound senior has an offer from Nevada. Iowa and Iowa State could be next to pull the trigger.

Elijah Reed, OL, Vista Peak (CO): The 6-4 and 295-pound senior has talked with several schools, most notably Colorado and Wyoming. Stay tuned. Things are about to heat up.

Kary Kutsch, OL, Shasta (CA): Searching for a diamond in the rough? Look no further. With a bit more polishing, the 6-5 and 275-pound senior is capable of contributing on Saturdays.

Nicolas  Berry, OL, Turlock (CA): The 6-1 and 330-pound center has been considered, unfairly or not, on the short side. He plays bigger than his listed height. With tons of heart, too.

Zachary Swartwout, DL, Loveland (CO): Arizona and Colorado State continue to keep a watchful eye on the 6-3 and 225-pound senior. And rightfully so, considering his high ceiling.

Anthony Hale, DL, Serrano, DL, Serrano (CA): The 6-2 and 270-pound senior is off to a good start with some FCS level interest. By graduation time, the FBS could be knocking on his door.

Marcus Bustos, DL, Heritage (CA): A possible destination at the next level for the 6-3 and 235-pound senior might be in the Big Sky Conference, more to the point Sacramento State.

Samuel Hines, DL, St. Mary’s College (CA): The 6-2 and 270-pound junior did not seem intimidated, nor was Troy Smith from Buhach Colony (CA) and Nehru Baskin from Las Vegas (NV).

For a closer look at all the participants at the recent All-American Combine, including statistics during skills testing, we’ve got you covered with the numbers right here (click on this link).