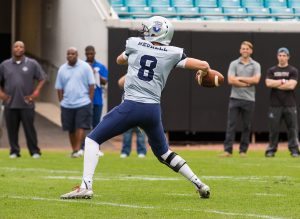 Georgetown commit Joseph Brunell participated in the Blue-Grey All-American Bowl and then took part in National Signing for prospects in the Class of 2017. (Photo courtesy of Sarah Hedden)

National Signing Day for prospects in the Class of 2017 started early this morning and will end at some point much later tonight as individuals from all over the country make all-important decision about their respective futures, particularly well-known alumni of the Blue-Grey All-American Bowl.

As most know, though still worth mentioning, many of the nation’s high-profile recruits played in one of three recent games. Each contest took place, of course, in an NFL facility and the student-athletes were fortunate enough to work with our NFL veteran coaching staff during the festivities.

For starters, West defeated East, 27-24, on Dec. 22 at Dallas Cowboys’ AT&T Stadium. Shortly thereafter, Grey won against Blue, 27-7, on Jan. 14 at Jacksonville Jaguars’ EverBank Field. Lastly, but certainly not least, Pacific got the better of Atlantic, 37-14, on Jan. 21 at Oakland Raiders’ Coliseum.

Following the All-American Bowls, the Blue-Grey Football Selection Committee sat down with the brand’s NFL veterans for exit interviews and the collection of upperclassmen talent was the topic of conversation. That said, with it being National Signing Day, here’s a look at the best of the best.

Editor’s Note: Below is a somewhat comprehensive list of players who committed, or, signed National Letters of Intent. The plan is to add names over the course of the next couple of hours, days, weeks, and months. Of course, as more official announcements are made. Stay tuned for the details.

Peyton Mansell, QB, Belton (TX): The Iowa commit was one of the better leaders around. Both on and off the field, for that matter.

Austin Burton, QB, West Orange (FL): The UCLA commit was not intimidated by the big stage. In fact, he shined in the spotlight.

Trenton Hatfield, QB, Muncie Central (IN): With a good understanding of the offense, the Illinois State commit delivered results.

Trey Coleman, RB, West Monroe (LA): The Tennessee commit would have liked to contribute more, still his presence was felt.

Terence Dunlap, RB, Maplesville (AL): Running the ball, catching it, special teams too, the Troy commit did a little bit of everything.

Dominic Williams, RB, Independence (TX): Despite prior plans, the Kansas commit proved to be a good representation of the brand.

Mikey Griebel, RB, Columbine (TX): The North Dakota commit made play, after play, and it was difficult to keep him off the field.

Billy Reagins, RB, Kempner (TX): With a frame most colleges covet, the Northern Colorado commit was as good as advertised.

Beau Corrales, WR, Georgetown (TX): A big target, particularly in the red zone, the North Carolina was a favorite of the signal-callers.

McLane Mannix, WR, Midland (TX): The Nevada commit did a little bit of everything, and most of it well, when called upon to do so.

David Cormier, WR, Volcano Vista (NM): Somewhat under the radar before the game, the Air Force commit opened up eyes.

Kedrick James, TE, La Vega (TX): One of the game’s more well-known national names, the Alabama commit lived up to the hype.

Riley Locklear, OL, Spring Valley (WV): The Tennessee commit was force to be reckon with and caused headaches for opponents.

Robert Martin, OL, St. Joseph Regional (NJ): Linemen had a difficult time getting to the backfield against the Penn State commit.

Owen Drexel, OL, Montclair (NJ): The Pitt commit was, in many ways, an extension of the coaching staff with the ball in his hands.

Johnathan Nathaniel, OL, Basha (AZ): The Washington State commit was one of the game’s more high-profile prospects, rightfully so.

Dakoda Newman, OL, Timberview (TX): With a motor that did not stop, the North Texas played with his foot on the gas pedal.

Evan Fields, DB, Midwest City (OK): All game long, it was apparent, quarterbacks threw the ball away from the Arizona State commit.

Kris McCune, DB, Dallas Christian (TX): The Oklahoma State commit shutdown an entire side of the field and was Defensive MVP.

Eric Scott, DB, Basehor-Linwood (KS): Didn’t matter if it was man or zone coverage, the Illinois State commit made a difference.

Jordan Walker, LB, Silverado (NV): Capable of playing multiple positions, the Southern Utah commit was as versatile as they come.

Jakharious Smith, DL, South Grand Prairie (TX): The Texas State commit was a late addition to the game, but worth the wait.

Blake Haubeil, K, Canisius (NY): The Ohio State commit put on a show with his powerful boots, before, during, and after, the game.

Jake McClure, P, East Hamilton (TN): With his big leg, the Oklahoma State commit flipped the field on more than one occasion.

Darriel Mack, QB, Norview (VA): The Central Florida commit got the job done with his arm and feet and the effort was impressive.

Anthony Butler, QB, Roman Catholic (PA): With a good head on his shoulders, the Morgan State commit exceeded many expectations.

Joseph Brunell, QB, Episcopal (FL): The Georgetown commit had good understanding, better than most, of what was expected.

Ivory Kelly-Martin, RB, Oswego East (IL): The Iowa commit did nothing to tarnish his growing reputation with a well-rounded effort here.

Titus McCoy, RB, Center Grove (IN): On the ground, or in the air, the Indiana State commit was a jack-of-all-trades type of back.

Justis Stokes, WR, Williams Field (AZ): The Northern Arizona commit initially did well underneath and that opened up things deep.

Ethan Piercy, WR, Fort Mill (SC): The Gardner-Webb commit had plenty of interest, then decided staying close to home was the best fit.

Adam Boselli, TE, Episcopal (FL): The North Carolina State made an appearance and created a buzz, particularly so on the sidelines.

Sean Fitzgerald, OL, Mt. Pleasant (MI): With an effort that caught the attention of coaches, the Michigan commit improved his stock.

Luis Lebron, OL, Sandalwood (FL): The Colorado State commit lived for contact. More physical the flow of the game, the better he did.

Larry Borom, OL, Brother Rice (MI): Calm, cool, and collected, off the field, the Missouri commit was loads of trouble on the field.

Eddie Brecht, OL, Lapeer (MI): The Kent State commit was an imposing presence, regardless of where he was lined up in the trenches.

Noah Knapp, OL, Bishop Sullivan (VA): Essentially an orchestrator with the ball in his hands, the Army commit ran the show well

Nick Novak, OL, Lake Orion (MI): The Navy commit had no trouble with motivation, he was fired up to make a name for himself.

Peter Wise, OL, Brunswick School (CT): Tough and nimble, a good combination, the Columbia commit did not hold anything back.

Jarques McClellion, DB, American Heritage (FL): Not one to back down from challenges, the Arkansas commit won many exchanges.

Randall Haynie, DB, Cardinal Gibbons (FL): Focused on playing ball in the SEC, the Vanderbilt commit did well in his prep circuit finale.

Ian Swenson, DB, Loyola Academy (IL): The UConn commit was a coaching staff favorite at practice. It was of same during the game.

Austin Johnson, LB, St. Petersburg (FL): A force to be reckon with at the second level, the Eastern Illinois commit was a major factor.

Tah’shim Knight, LB, Northside Christian (FL): It seemed as if no one worked more diligently than the Charleston Southern commit.

Joshua Maize, DL, Deerfield (IL): In the end, there was doubt about it, the Miami (OH) commit earned the honor of Defensive MVP.

Steven Franklin, DL, Glasgow (KY): The Eastern Kentucky commit had an uncanny ability to be around the ball, at all times, no less.

Pressley Harvin, P, Sumter (SC): Not many specialists were able to keep the crowd’s attention. Except for the Georgia Tech commit.

Chase Cord, QB, Sunrise (AZ): The Boise State commit, hands down, was named as Offensive MVP after his memorable effort.

Evidence Njoku, WR, Wayne Hills (NJ): The Miami commit had his way in the secondary, and most times, no one could contain him

Curtis Chiaverini, WR, Valor Christian (CO): Disciplined, a technician many say, the Colorado commit had no trouble with getting open.

Dominic Gudino, OL, Olympian (CA): The San Diego State commit dominated on the interior and his teammates were the benefactors.

Abraham Lucas, OL, Archbishop Murphy (WA): A man among boys quite frequently, the Washington State commit was without peer.

Matt McClurg, OL, Heritage (CO): The Oklahoma State commit had Pac-12 Conference interest, but is bound for the Big 12 Conference.

Kevin Williams, OL, Omaha North (NE): At first glance, his size jumped out, yet the Northern Colorado commit was athletic too.

Zachary Hauschild, OL, Clearwater (FL): No one worked harder than the Youngstown State commit and end result was a scholarship.

Rourke Freeburg, DB, Desert Mountain (AZ): The Arizona commit hit as hard as anyone in the game, that was evident from the start.

Brent Cimaglia, K, Page (TN): With a cannon for a leg, the Tennessee commit kept everyone on their toes with his 51-yard field goal.

Riley Patterson, K, Edwardsville (IL): Not to be outdone, the Memphis commit caught the attention of many with his accuracy.