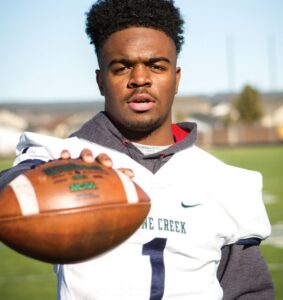 Big Sky Conference target David Moore was among the prospects in attendance at the Blue-Grey All-American Combine (Colorado Regional).

Year in, and year out, there’s no disputing the fact that the Blue-Grey All-American Combine (Colorado Regional) is one of the fastest growing workout on the nationwide circuit.

All-American Bowl alumni Jackson Block and Elijah Reed were also on hand, presumably to get a closer look at the collection of talent from the Rocky Mountains. Details are below.

Gavin Herberg, QB, Pine Creek (CO): Unavailable, but with plans for another workout, the 6-foot-1 and 180-pound junior was contacted by Colorado State.

Alex Weaver, QB, Lewis-Palmer (CO): The 6-3 and 200-pound appears to have a bright future ahead and has talked with a couple of different programs.

Hudson Grant, RB, Pikes Peak Christian (CO): The 6-2 and 185-pound junior was a pleasant surprise, and perhaps, made the biggest overall impact.

Trevin Johnson, RB, Holy Family (CO): With visits to Colorado State and Northern Colorado, the 5-9 and 165-pound sophomore has a bright future.

Spencer Peterson, RB, Pine Creek (CO): Big and strong, versatile as they come too, the 6-foot and 194-pound junior strengthened a growing reputation.

Keyon Burris, WR, Vista Ridge (CO): Seemingly ahead of the curve, the 6-2 and 165-pound sophomore has a fair amount upside. Keep an eye on him.

Jarrell Trahan, WR, Highlands Ranch (CO): The 5-9 and 170-pound sophomore did a little of everything, most of it well. He got the job done, indeed.

Darrell Davis, WR, Vista Ridge (CO): Young on paper, with a high ceiling regardless, the 5-10 and 180-pound sophomore took a step in the right direction.

Eddie Kyle, WR, Pine Creek (CO): The 5-9 and 165-pound junior could end up finding a good landing spot with a team in the Mountain West Conference.

Isaiah Talapu, TE, Vista Ridge (CO): No stranger to the environment and pace of play, the 5-11 and 188-pound junior played some receiver as well.

Carver Willis, OL, Durango (CO): Colorado State and Wyoming put scholarship offers in place for the 6-5 and 250-pound junior. Other schools are in the mix.

Derric Overbey, OL, Vista Ridge (CO): A center with a good understanding of the game, the 6-2 and 310-pound junior held his own down in the trenches.

Wilson Clark, OL, Ralston Valley (CO): When all is said and done, the 6-4 and 250-pound sophomore might prove to be the best of the entire bunch.

Seyi Oladipo, DB, Eaglecrest (CO): With a visit to nearby Colorado on his resume, the path to success seems clear for the 5-11 and 177-pound sophomore.

Devin Antoine, DB, Vista Ridge (CO): The 5-10 and 190-pound junior has communicated with Arizona State, Colorado State and Houston, among others.

Ben Beecher, LB, Ponderosa (CO): Firmly on the radar of Air Force and Colorado State, the 6-foot and 210-pound junior is heading in the right direction.

Montral Hamerick, DL, Southwestern Heights (CO): Fast and physical, the 6-3 and 225-pound sophomore opened up the eyes of just about everyone.

Stephen Hughes, DL, Columbine (CO): The 6-1 and 235-pound junior had a motor that didn’t stop. All gas and no brakes. North Dakota is on his list.