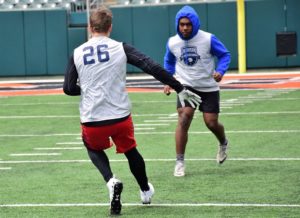 In terms of venues on the nationwide circuit, they don’t get much better than Cincinnati Bengals’ Paul Brown Stadium, site of the Blue-Grey All-American Combine (Midwest Regional).

NFL veteran trainers Rodney Beasley and Reggie Young served as lead instructors during the workout. Both of them came away impressed with the collection of talent on hand.

Without much further ado, here’s a closer look at the prospects who took care of business on one of the biggest stages around, naturally an NFL stadium, also with NFL level coaches.

Mitchell Heilman, QB, Ashland (OH): The 6-foot and 180-pound junior has been in contact with schools from the Ivy League, perhaps most notably Columbia.

Shane Hamm, QB, Archbishop Hoban (OK): On the official roster, but unavailable, the 6-foot and 195-pound sophomore has plans to attend another session.

Jaden Hall, RB, Shawnee (OH): Ball State, Eastern Michigan, Kent State and Toledo are among the many programs interested in the 6-foot and 210-pound junior.

Jerome Lee, RB, Warrensville Heights (OH): The 5-10 and 190-pound junior has communicated with multiple teams and Western Michigan is at the top of the list.

Tyrese Dorn, RB, Walnut Hills (OH): Largely underrated, but not much longer after his effort, the 5-10 and 190-pound junior went out and made a name for himself.

Shawn Munnerlyn, WR, Independence (OH): When all is said and done, by the time he’s a senior, the 6-5 and 200-pound sophomore might be the best of this bunch.

Matthew Willis, WR, Chaminade Julienne (OH): Seemingly unmatched when it comes to speed, the 5-10 and 170-pound junior could not be caught from behind.

Seth Fischbach, WR, Burrell (PA): The 6-1 and 190-pound junior is a target of teams in the Northeast Conference, with Robert Morris out in front it. Or so it seems.

Brandon Ross, TE, Thomas Worthington (OH): Big and agile, particularly so for his growing frame, the 6-4 and 215-pound sophomore has plenty of upside.

Cale Bunch, OL, Bedford North Lawrence (IN): The 6-5 and 275-pound junior has more than a few feelers from programs in the Missouri Valley Football Conference.

Casey Whitehouse, OL, Shelby County (KY): A center, the 6-3 and 240-pound junior had a good understanding of what the coaching staff expected. He delivered, as well.

Codie Spencer, OL, Stebbins (OH): The 6-4 and 301-pound junior was a force to be reckon with, along with the likes of Timothy Atwell from Hart County (KY).

James Burkholder, OL, Galion (OH): Down in the trenches, the 6-4 and 287-pound junior opened up eyes, as did Ben Compliment from Dawson Bryant (OH).

William Anglen, DB, Glenville (OH): The 6-3 and 190-pound junior has offers from Ball State and Cincinnati. Bowling Green and Kent State are also in the mix.

Miquan Grace, DB, Winton Woods (OH): No stranger to the setting, having competed before, the 6-foot and 185-pound junior has 20-plus scholarships in place.

Jaylin Bybee, DB, Frederick Douglass (KY): The 5-9 and 174-pound junior was certainly up for the challenge. He did not back down from anyone or anything.

Nicholas Woodyard, DB, East Liverpool (OH): The 6-1 and 170-pound held his own. The same thing can be said about Irvin Hodrick from Purcell Marian (KY).

Myles Carter, LB, Reynoldsburg (OH): Having already been on campus at Ohio State, the 5-11 and 220-pound sophomore appears to have a bright future ahead.

Joseph Weaver, LB, Doss (KY): The 6-foot and 190-pound junior earned the respect of his counterparts, as did Seth Wood from Wheeling Park (WV).

Bryce Hall, DL, Cranbrook Kingswood (MI): The 6-3 and 240-pound sophomore has fans in the Mid-American Conference (MAC) and Central Michigan is among them.

Ryan Sweat, DL, Findlay (OH): From start to finish, the 6-2 and 245-pound junior had a motor that did not stop. It was full-speed ahead. All gas and no brakes.

Theo Bruns, DL, Bethlehem (KY): Big and nasty at times, there’s nothing wrong with that either, the 6-4 and 230-pound junior was about as intense as they come.

Tyler Householder, DL, Berne Union (OH): No slouch, with somewhat surprising athleticism, the 6-4 and 230-pound junior turned heads of most everyone.

These individuals will have an all-important star rating, as well as a workout evaluation and HUDL review as part of their profiles, for the recruiting convenience of college coaches nationwide.

Also, each member of will receive an exclusive invite to one of the brand’s upcoming All-American Combines (Super Regional level) to be held nationwide at NFL facilities or college complexes.

When it comes to all-important statistics from the nationwide series of All-American Combines, such as this most recent one, we’ve got you covered. For the numbers, look no further (click here).