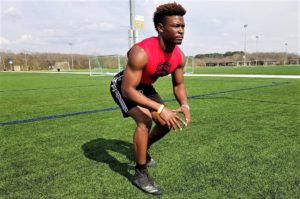 ACC target Noah Terry was among the many participants in attendance at the Blue-Grey All-American Combine (North Carolina Regional).

Seemingly without fail on an annual basis, high-profile prospects, also under-the radar recruits, show up and show out at the Blue-Grey All-American Combine (North Carolina Regional).

This year was no different than any others from the past, true to form, as NFL veteran trainers Rodney Beasley and Reggie Young served as the lead instructors during the workout.

That said, and without further ado, what follows is a who’s who list of the individuals who left a lasting impression on the coaching staff. In no particular order, here’s some insight.

Jaden Taylor, QB, Lakeside (GA): At a deep position, the 6-foot and 185-pound junior might have been best. Georgia State, Furman and Wofford are among a handful of interested programs.

Chas DeBruhl, QB, Andrew Jackson (SC): The 6-1 and 180-pound junior has been in contact with the Ivy League, most notably Columbia, Princeton and Yale.

Gabe Johnson, QB, Hoggard (NC): The 6-4 and 195-pound sophomore stood out in a crowd. East Carolina, Old Dominion, South Carolina and Wake Forest could be targets.

Kyle Pinnix, QB, Reidsville (NC): Young, yet with plenty of upside, the 6-2 and 180-pound sophomore has talked with Duke, North Carolina and Wake Forest.

Gavin Kuld, QB, High Point Christian Academy (NC): The 6-5 and 207-pound sophomore was recently on campus at Virginia Tech. His name is one to remember.

Josh Pullen, RB, Rolesvile (NC): Appalachian State and East Carolina continue to keep the lines of communication open with the 6-1 and 213-pound junior.

Cortezz Jones, RB, Southwest Edgecombe (NC): A target of teams in the Colonial Athletic Association, the future is bright for the 6-1 and 201-pound junior.

Tyreek McCoy, RB, Union Pines (NC): The 6-foot and 195-pound junior has built up an above-average rapport with programs from the Sun Belt Conference.

Myles Coble, WR, Athens Drive (NC): A while ago, and still in the mix, Bowling Green and Miami Ohio jumped on the bandwagon of the 6-1 and 180-pound junior.

Matthew Spencer, WR, Victory Christian (NC): Over the middle, on the sideline, down the field, the 6-2 and 185-pound junior held his own. And then some.

Lane Ruby, WR, Southeastern (OH): Fast as they come, among the quickest, the 5-9 and 170-pound junior earned the respect of his peers and counterparts.

Nathan Linkous, OL, Stuart Cramer (NC): The 6-6 and 268-pound sophomore has an offer from North Carolina-Charlotte. It could be the first of many for him.

Nathan Caldwell, OL, Rustburg (VA): The 6-3 and 257-pound junior was a force up front. He did a little bit of everything in the run and pass game.

Storm James, OL, J.H. Rose (NC): A center, 6-2 and 245-pound junior battled down in the trenches and came away on the better on many exchanges.

Garrett Martin, OL, Alexander Central (NC): The 6-3 and 290-pound junior made an impact from start to finish. Same for Cyle Hicks from Avery County (NC).

Noah Terry, DB, Vance County (NC): Nearby schools such as Duke, North Carolina and Wake Forest seem to have their eyes on the 5-11 and 180-pound junior.

Silas James, DB, J.H. Rose (NC): The 5-10 and 166-pound junior might be a good fit in the Colonial Athletic Association, specifically with James Madison.

Brooks Gsell, DB, Piedmont (NC): In the unexpected absence of the 6-1 and 175-pound junior, Michael Hussey from Southwest Edgecombe (NC) stepped up.

Jaki Brevard, LB, Southern Durham (NC): Virginia Tech is one of several schools who are on the radar for the 6-1 and 212-pound junior. Keep an eye on this.

C.J. Livesay, LB, Morristown Hamblen East (TN): The 6-foot and 215-pound junior has feelers from Eastern Kentucky and Middle Tennessee State, among others.

Quentin Williamson, LB, Grimsley (NC): Young, on paper anyway, the 5-11 and 210-pound sophomore has already been on a visit to North Carolina State.

Memphis Jones, LB, Robinson (NC): The 6-1 and 197-pound sophomore would not be denied. Tyler Anderson from Northern Guilford (NC) was in same category.

Darian Varner, DL, Maury (VA): On the roster, not available, but with plans for another workout, the 6-2 and 248-pound junior has offers from Coastal Carolina and Kent State.

Darius Rodgers, DL, Goldsboro (NC): With an offer from East Carolina, North Carolina State and Wake Forest figure to step up effort for the 6-4 and 210-pound junior.

Travali Price, DL, North Lincoln (NC): The 6-4 and 235-pound sophomore has been on campus at nearby North Carolina State, North Carolina and Wake Forest.

Camar Kyle, DL, Rolesville (NC): Appalachian State East Carolina are apparent fans of the 6-2 and 215-pound junior and the situation is one to watch.