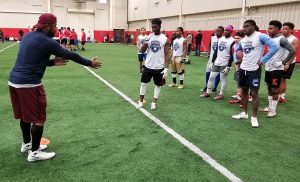 NFL veteran trainer Reggie Young (left) was among the instructors with professional experience at the Blue-Grey All-American Combine (Dallas Regional).

One of the nation’s hotbeds for talent, the annual stop in the Lone Star State for the Blue-Grey All-American Combine (Dallas Regional) lived up to the hype.

That said, after taking some time to talk with coaching staff about the workout, it’s best to now provide a bit of insight on the many individuals in attendance.

Keegan Shoemaker, QB, Prosper (TX): The 6-foot-3 and 185-pound junior did well and was contacted by teams in the Sun Belt Conference, mainly Texas State.

Nate Hayden, QB, Liberty Christian (TX): Unfortunately, not on hand, but with plans already in motion for an upcoming event, the 6-2 and 198-pound junior has been an Ivy League target.

Azaya Patrick, RB, Teague (TX): Bucknell has the 5-10 and 195-pound junior on the radar.  After seeing him in action, worth noting, the attention is certainly worthy.

Calvin Wiggins, WR, Byron Nelson (TX): The 6-4 and 190-pound junior has had conversations with SMU, among others, and an offer from a school could soon materialize.

A.J. Martin, WR, McAlester (OK): The 6-1 and 185-pound junior opened up eyes. Moving forward, it’s important for him to maintain the momentum built in the setting.

Ryan Mora, TE, The Colony (TX): North Texas, Army and Navy might be in the market for the 6-1 and 220-pound junior and that’s a situation worth monitoring.

Matthew Norman, DB, Allen (TX): The 5-9 and 165-pound sophomore received praise from the likes of Teague and Crockett. Sky’s the limit for the underclassman.

Riley Strey, DB, Flower Mound (TX): Plain and simple, the 6-1 and 180-pound junior would not be denied. Cameron Pair from The Colony (TX) also did a good job.

Mechac Mashaka, LB, Birdville (TX): Regardless of position, or class distinction, the 6-4 and 205-pound junior might have possessed the most upside, bottom line.

Cory Ebron, LB, Waco (TX): The 6-foot and 240-pound junior could land with a program in the Southern Conference and Stephen F. Austin could be a frontrunner.

Nate Maulsby, LB, Denison (TX): Already on campus once at Arkansas, the 6-foot and 205-pound junior showed that he has what it takes to play at the next level.

Devin Sterling, LB, Sunnyvale (TX): The 6-1 and 230-pound sophomore often played with the poise of a veteran. When all is said and done, as a senior, watch out.

Alex Cerra, LB, Dallas Christian (TX): Not in attendance due unforeseen circumstances, the 6-1 and 212-pound junior has talked with teams in the Patriot League.

Regan Riddle, OL, Highland Park (TX): The 6-2 and 283-pound junior has an offer from North Texas. Can’t forget to mention that Army and Navy are also in the mix.

Zane Haas, OL, Georgetown (TX): Capable of lining up at center, the 6-2 and 250-pound junior has what appears to be a particularly bright future ahead of him.

Noah Plsek, OL, Reicher Catholic (TX): On paper, raw and perceived as inexperienced, the 6-4 and 292-pound sophomore went out and delivered desired results.

Dartanyon Cardoza, DL, Gunter (TX): The 6-3 and 220-pound junior could not be stopped, most times that is, when he came off the edge during one-on-ones.

Jackson Bussey, DL, Scurry-Rosser (TX): Big and nasty, opponents who got on the bad side of the 6-3 and 225-pound junior, safe to say, they didn’t like the end result.