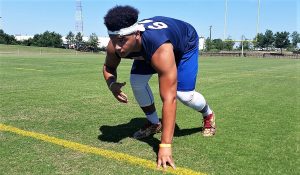 Already with a pair of offers, Chris Campbell nearly stole the show at the Blue-Grey All-American Combine (Mid-Atlantic Super) in Richmond (VA).

What a weekend. What a way to start, for that matter, as the Blue-Grey All-American Combine (Mid-Atlantic Super) was the first stop on the nationwide circuit of invite-only workouts.

The venue, of course and similar to year’s past with Bon Secours serving as the host, was none other than the training center for the Washington Redskins located in Richmond (VA).

NFL veteran trainer Rodney Beasley was lead instructor this time around and he had plenty of help along the way from NFL veterans Billy McMullen, J’vonne Parker and Mark Parson.

In terms of the the prospects in attendance, there was no shortage of talent. That said, let’s take a much closer look at the individuals on hand who left a lasting impression on the staff.

Brayden Hawkins, QB, Myers (NC): The 6-foot-3 and 215-pound senior with plenty of college interest remains on the radar despite his unfortunate absence.

Luke Bussel, QB, Greenbrier Christian Academy (VA): The 6-2 and 180-pound senior did well and had some stiff competition from many peers on hand.

Dillan Davis, QB,  West Iredell (NC): No slouch, the 6-foot and 175-pound senior held his own and also took advantage of more than a few opportunities.

Duce Johnson, RB, Alliance (OH): The 5-10 and 200-pound senior has been contacted several different schools in the Mid-American Conference (MAC).

Tristan Somerville, RB, Freedom (NC): With an eye-opening effort in the 40-yard dash, the 5-11 and 170-pound senior was able to keep everyone’s attention.

Darntrell Council, RB, Southwest Edgecombe (NC): The 5-9 and 175-pound junior has a high ceiling. With plans to soon work with Beasley, sky’s the limit.

Grant Thompson, WR, Ashe County (NC): Coastal Carolina in the Sun Belt Conference is interested and the future is bright for 6-2 and 190-pound senior.

Michael Horsford, WR, Douglas Freeman (VA): The 6-2 and 190-pound senior did nothing to tarnish his growing reputation with a well-rounded effort here.

Patrick Gorman, WR, Douglas Freeman (VA): Over the middle, on the sideline and down the field, there’s a lot to like about the 5-10 and 160-pound senior.

Lex Goodwin, WR, Wake Forest (NC): The 6-3 and 205-pound senior looked the part. And he played the part, too. His time is coming, no doubt about it.

Ford Moser, WR, North Guilford (NC): With NFL genes and NFL veteran Ricky Proehl as a family member, the 6-foot and 180-pound junior is well on his way.

Jon Tobin, TE, Jefferson Forest (VA): The 6-4 and 215-pound senior was unstoppable. Conference USA has targeted him, most notably being Old Dominion.

Steven Roscoe, DB, West Springfield (VA): The 5-8 and 170-pound senior did not back down from any challenge. More often than not, he was up to the test.

Phillip Willoughby, LB, Tarboro (NC): Teams from the American Athletic Conference have the 6-foot and 207-pound senior locked in on their respective radars.

Peyton Carneal, LB, Gloucester (VA): The 6-foot and 230-pound senior seems to be in a good position to draw more and more interest from Penn and Princeton.

Cameron Trees, LB, Bullitt East (KY): Eastern Kentucky and Western Kentucky could be a pair of potential destinations down the road for the 5-11 and 195 senior.

Anthony Pleasants, LB, Brunswick (VA): The 6-foot and 185-pound senior was certainly no stranger to this environment, having attended the workout a year ago.

Peyton Mulligan, OL, Blessed Sacrament-Huguenot (VA): The 6-4 and 265-pound senior opened up some eyes with his determined play down in the trenches.

Jared Hufford, OL, Licking Valley (OH): A big body, the 6-5 and 295-pound junior moved well for his size. Same can be said for Josh Kruger from Wake Forest (NC).

Chris Campbell, DL, West Craven (NC): The 6-2 and 220-pound senior was without peer. Accordingly, he has offers from the Mid-Eastern Athletic Conference (MEAC).

Drew Binion, DL, Stonewall Jackson (VA): With a motor that did not stop, the 6-3 and 280-pound senior turned heads, along with Christian Phaby from Hunt (NC).