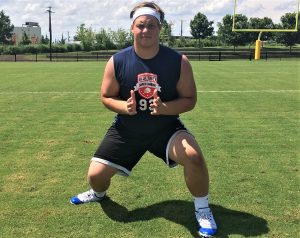 After evaluating the many different results from the Blue-Grey All-American Combine (Mid-Atlantic Super), it’s not a stretch to think the collection of talent was among the best on the brand’s workout circuit this year.

That said, it’s time to take a much closer look at how a handful of the prospects in attendance faired during skills testing, the individual session as well the one-on-ones. So, without further ado, here’s a who’s who list.

Da’Quan Vinson, QB, James Island (SC): The 6-foot-5 and 190-pound senior has talked with Coastal Carolina and Western Carolina, among other programs from around the country. His time is coming.

Austin Browning, QB, Chesapeake (OH): The 6-1 and 190-pound senior built a relationship with Yale and there’s no reason to think that things will change anytime soon.

C.J. Hayden, RB, Freedom (NC): The 5-10 and 170-pound senior was in contact with Appalachian State, East Carolina and Eastern Kentucky. Wake Forest could emerge, too.

David Baros, RB, Rockdale County (GA): On the official roster, but injured, the 5-9 and 170-pound senior has kept the lines of communication open with Georgia State.

Devonta Hall, WR, Washington (IN): The 5-10 and 170-pound senior impressed the powers that be. The same thing can be said about Makell Smith from Maplewood (TN).

Jordan Allen, WR, Hunt (NC): The 6-1 and 175-pound senior opened up some eyes, as did Darren Rittwage from Glenpool (OK) and Brandon Peace from Granville Central (NC).

Jon Surman, TE, Miami Valley Christian Academy (OH): With an offer from Butler and Morehead State, the 6-4 and 230-pound senior appears destined to play on Saturdays.

Andrew Horlbeck, DB, Robinson (NC): In the not so distant past, the 5-10 and 155-pound senior talked with the staff from Coastal Carolina and North Carolina-Charlotte.

Marquan Jones, DB, Abermarle (VA): The 5-9 and 178-pound senior is on the radar of teams in the Mid-Eastern Athletic Conference (MEAC), with Howard out in front.

Luca Lutzel, DB, Southlake Christian Academy (NC): Young, with upside, Baylor or another team in the Big 12 Conference could be a fit for the 6-foot and 155-pound junior.

Cameron Saunders, DB, Ft. Mill (SC): Gritty and determined, the 5-10 and 160-pound senior wanted to come and make a statement. He did just that, for the record.

Ramon Puryear, LB, Eastern (NC): Impressive throughout, it makes complete sense that Ball State and Western Kentucky are interested in the 6-3 and 235-pound senior.

Ron Davis, LB, Eau Claire (SC): No stranger to the environment, the 5-10 and 225-pound senior seemed to be comfortable on the big stage and did well in the spotlight.

Malik Fordham, LB, Bishop Snyder (FL): The 5-11 and 170-pound senior held his own, with John Barber from Abermarle (VA) and Collin Nichols from Troy-Buchanan (MO).

David Sawyer, OL, Rose (NC): With feelers from schools in the ACC, it could be a mere matter time before the first offer materializes for the 6-6 and 280-pound senior.

Marc Rumpke, OL, Lexington Catholic (KY): The 6-2 and 290-pound senior has a scholarship in place from Air Force offer. Eastern Kentucky or Western Kentucky could be next.

Layne Daniel, OL, Sherman (WV): It’s no secret, Marshall is a favorite of the 6-3 and 360-pound senior. The ball would appear to be in the court of the Thundering Herd.

Ty Jackson, OL, Illini West (IL): Apparently, Western Illinois has seen something it likes in the 6-3 and 294-pound senior. Rightfully so, too. Sky’s the limit for him.

Christian Phaby, DL, Hunt (NC): East Carolina makes the most sense for the 6-2 and 262-pound senior, and once word spreads about his effort here, other programs will follow.

Kaleb Nicholson, DL, Bandys (NC): The 6-3 and 255-pound senior was difficult to deal with down in the trenches. Chauncey Lynch from Bird (VA) gave opponents fits, too.

Xavier Wright, DL, Christiansburg (VA): A force to be reckon with, the 6-2 and 250-pound senior often could not be stopped. Trace Brown from Greenback (TN) also did well.