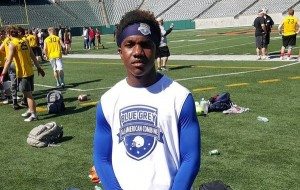 Despite being an underclassman, MiQuan Grace showed glimpses of tremendous upside at the recent Blue-Grey All-American Combine (Midwest Regional).

No secret, it’s been mentioned around these parts plenty of times in the past, states such as California, Florida and Texas are traditionally known for being a hotbed for prospects on the gridiron.

There’s no arguing with the success, or results found on yearly basis. Still, the Keystone State always has more than enough talent to go around. That was evident once again this past weekend.

What follows, naturally, are some news and notes about the many recruits in attendance. In retrospect, it should be mentioned, there were plenty of impressive efforts, similar to recent years.

Patrick Robinson, QB, Hamilton Township (OH): Another southpaw who’s been contacted by teams in the Mid-American Conference (MAC), the 5-9 and 170-pound junior built on a growing reputation.

Cody Bartrum, QB, Meigs (OH): No stranger to the workout environment, the 6-1 and 210-pound junior did well for the third time in as many tries. An added bonus, he can also line up in the secondary.

Jordan Campbell, RB, Lebanon (OH): Explosive, his mark in the broad jump was a good representation of that, the 6-1 and 184-pound junior was determined to stand out in a crowd. Mission accomplished.

Garren Messmore, RB, Elder (OH): The 5-9 and 183-pound junior excelled in the morning’s skills testing. Anfernee Lipscomb from Gamble Montessori (OH) then duplicated the feat in the afternoon session.

Demetrious Johnson, RB, Northmor (OH): With the best broad jump mark, the 5-8 and 160-pound junior was explosive from start to finish. Trevor Kennard from Mt. Carmel (IL), at times, was in the category.

Alec Gold, RB, Jonesboro (IL): The 6-foot and 200-pound junior was a bigger type of back who got the job done more often than not. In fact, same thing can be said about Ryan Bagnili from Loveland (OH).

Garth Medors, WR, Watkins Memorial (OH): A precise route runner all day long, the 5-11 and 190-pound junior caught everything thrown his way. Suppose that explains his contact with Purdue and Navy.

Dawson Aichholz, WR, Indian Hill (OH): The 6-1 and 180-pound junior was about as well-rounded as they came. Not surprisingly, multiple teams in the Ivy League are interested, including Harvard and Penn.

Ja’von Hicks, WR, Colerain (OH): Inexperienced, on paper that is, the 6-2 and 182-pound sophomore played with the poise of a varsity veteran. By morning’s end, he was named as the Offensive MVP.

Giante Hicks, WR, Winton Woods (OH): With two scholarships on the table, and others to likely follow, the 5-11 and 200-pound junior appears to be on the right track. His path is certainly cleared for success.

Joe Arnold, WR, St. Francis de Sales (OH): The 5-10 and 165-pound junior not only clicked well with prep circuit teammate and quarterback Dylan Todd, but he also connected with other the signal-callers.

Jacob Miller, WR, Ayersville (OH): Smooth, with little wasted motion, the 6-foot and 165-pound made the difficult often appear easy. Greg Jackson from Northwest (OH) was another name to remember.

Scott Mullenix, TE, Eastern (OH): The 6-2 and 225-pound junior, who has emerged as a potential target for Southern Illinois, turned out to be one of the most complete prospect at his spot on the field.

Anthony Rodgers, DB, Princeton (OH): Increasingly known in Big 10 Conference recruiting circles, Purdue is a potential suitor for the 5-10 and 170-pound junior who was the afternoon’s Defensive MVP.

MiQuan Grace, DB, Winton (OH): The 5-8 and 155-pound freshman-to-be proved that it’s only a matter of time before he’s national name. Worth noting, Cincinnati, Kent State and Kentucky have offered.

Robert Westerkamp, DB, Elder (OH): Deep at the position, the 6-2 and 175-pound junior did well in this setting, along with Robert Coppa from Indian Creek (OH) and Alex Ray from Cabell Midland (WV).

DeMarco Baker, LB, Woodward (OH): The 6-2 and 205-pound junior was eager to be considered among the top recruits on hand. When all was said and done, he took home the morning’s Defensive MVP.

Cameron Barrett, LB, Dixie Heights (OH): Anything, and everything, that the coaching staff asked, the 6-1 and 210-pound junior did nearly to perfection. Accordingly, he’s received interest from the MAC.

Larry Jones, LB, Purcell Marian (OH): The 5-11 and 208-pound junior is on the radar of Eastern Michigan and Ball State. After his effort during the workout, the attention is warranted by those programs.

Mose Lattimore, LB, West (OH): Big and strong, somewhat surprisingly athletic as well, the 6-foot and 205-pound junior made an impact. Drake Pence from East Knox (OH) fell in to the same category.

Hunter Ruber, LB, Walton Verona (KY): The 6-foot and 245-pound junior showed flashes of potential over the course of the afternoon. In retrospect, so did counterpart D’Meko Pryor from Taft (OH).

Jake Boger, LB, Lebanon (OH): One of those workout warriors, the 5-10 and 218-pound junior was the strongest in the morning group. Tanner Wilson from Ironton (OH) had similar results thereafter.

Sean McCafferty, OL, Anderson (OH): The 6-3 and 300-pound junior did not back down from a challenge in this environment. That said, you can go ahead and count Purdue as a fan of his determination.

Seth Douglas, OL, Troy Christian (OH): Never one to take a rep off, or play, the 6-2 and 270-pound junior did the dirty work down in the trenches. In the process, he endeared himself to many onlookers.

Tim Leach, OL, Centennial (OH): The 6-3 and 280-pound junior won more exchanges than he lost during the one-on-ones. Now, with a renewed focus on skills testing, he could soon have college options.

Dane Stambaugh, DL, Lakewood (MI): Teams from the MAC have recently talked with the 6-3 and 318-pound junior. Still, given his upside, he just might be destined to play in the Big 10 Conference.

Peyton Stallard, DL, Burton (VA): The 6-4 and 280-pound junior has talked with Virginia Military Institute (VMI) and Richmond. Chances are, he continues to steadily improve and his list grows, and grows.

Daniel Becker, DL, Indian Hill (OH): First thing that jumped out was his frame, and once in motion, in the flow of physical play, the 6-4 and 245-pound junior proved that he was more than just a big body.