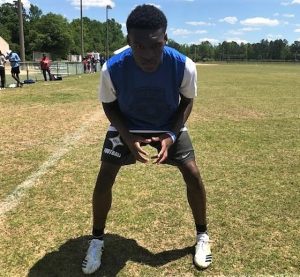 ACC target Anthony Jackson was among the many prospects at the Blue-Grey All-American Combine (South Carolina Regional).

Back in a familiar setting, albeit a slightly different part of the state, the turnout went much better than expected at the Blue-Grey All-American Combine (South Carolina Regional).

NFL veteran Ken Stills was lead instructor and put together a more than capable coaching staff. Each of the one-time professional passed along their respective knowledge, naturally.

What follows is a comprehensive list of individuals who impressed the powers that be, of course we’re talking about Stills & Co. So, without further ado, let’s go ahead and get started.

Da’Quan Vinson, QB, James Island (SC): The 6-foot-5 and 190-pound junior was in a class all his own. Coastal Carolina and Western Carolina have expressed interest.

Antonio Gantt, RB, River Bluff (SC): On the official roster, but not on hand do to some unforeseen circumstances, the 5-9 and 174-pound junior plans to attend an upcoming workout.

Tyrece Wright, WR, McBee (SC): The 5-11 and 162-pound junior has been on contact with schools in the Big South Conference and programs in the Southern Conference.

Keith Currence, WR, South Pointe (SC): A speedster, the 5-10 and 169-pound junior was one of the faster prospects around. Not too mention, he was sudden with quickness.

Anthony Jackson, DB, Rock Hill (SC): When all is said and done, the 6-1 and 168-pound sophomore with an offer from Duke might turn out to be the best of the bunch.

Jurel Armstrong, DB, New Hampstead (GA): The 5-8 and 170-pound junior has successfully kept the lines of communication open with Georgia State. More details on the way.

Tyrese Scott, LB, Kingstree (SC): The 6-foot and 225-pound junior opened up eyes from start to finish. Same thing can be said about Ron Davis from Eau Claire (SC).

Joshua Bates, LB, Darlington (SC): The 6-foot and 195-pound junior turned heads early on, and then, kept everyone’s attention, as did Chandler Nolan from Latta (SC).

Will McDonald, OL, Porter Ridge (NC): Coastal Carolina and East Carolina appear to be frontrunners for a potential commitment from the 6-3 and 307-pound junior.

Cameron Ivy-Young, OL, Bradwell Institute (GA): Georgia Southern is a potential suitor for the 6-2 and 270-pound junior. The bandwagon could soon fill up fast.

Edward Drake, DL, Broome (SC): Raw and largely inexperienced, that is, on paper, the 6-2 and 302-pound sophomore played with the poise of an upperclassman.