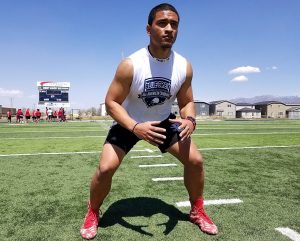 Pac-12 Conference target Lolani Langi was among the many prospects at the Blue-Grey All-American Combine (Utah Regional).

Back for the second time in as many years, the encore edition of the Blue-Grey All-American Combine (Utah Regional) was just as successful as the debut.

NFL veteran Mark McMillian, with NFL veteran trainer Reggie Young and Tre Ofahengaue from Level Up Elites were in attendance and gave back to the game.

Make no mistake, the prospects on hand took advantage of the instruction provided by the one-time professionals and here is a look at the standouts.

Jayden Clemons, QB, Skyridge (UT): Injured, but at the workout, the 6-foot-2 and 185-pound junior has been in contact with Utah, Utah State and Vanderbilt.

Braedon Wissler, RB, Bingham (UT): Montana and Weber State are among the potential suitors for the 5-7 and 168-pound junior, who nearly stole the show.

Talmage Brown, RB, Summit Academy (UT): Much improved, it’s no surprise to learn the 5-10 and 205-pound junior has talked with Southern Utah and Utah State.

Drason Havea, RB, Provo (UT): The 6-2 and 210-pound sophomore opened up eyes of onlookers, as did his counterpart Ousmane Doumbia from Highland (UT).

Trystan Hymas, WR, Riverton (UT): In action for the second straight year, the 6-2 and 218-pound junior took a step forward and impressed the coaching staff.

Jake Pedersen, WR, Orem (UT): The 5-8 and 160-pound junior missed the workout, yet plans to attend another event. BYU has expressed varied levels of interest.

Bodie Schoonover, TE, American Fork (UT): Apparently, Southern Utah is a fan of the 6-4 and 206-pound sophomore. Keep this in mind, there’s plenty to like about him.

Lolani Langi, LB, Bingham (UT): The 6-2 and 205-junior with multiple scholarships offers from programs in the Pac-12 Conference was seemingly in a class of his own.

Carson Stokes, LB, Northridge (UT): Utah State and Weber State are on the bandwagon of the 6-2 and 205-pound junior. And rightfully so after his effort here.

Canaan Yarro, OL, Timpview (UT): A center with interest from the Mountain West Conference, the 6-2 and 280-pound junior was the top player at his position.

Zack Mendoza, OL, Roy (UT): The 6-6 and 270-pound junior is on the radar of Utah State and Weber State. It appears as if Utah and BYU might be in the mix, too.

Alex Paluck, OL, Mountlake Terrace (WA): A center, Montana, UNLV and UTEP have kept tabs on the 6-1 and 285-pound junior. The lines of communication remain open.

Fred Prescott, OL, Orem (UT): The first thing that jumped out was the size of the 6-4 and 315-pound junior and he proved to be more than just a big body.

Carson Fugleburg, DL, Idaho Falls (ID): Once a target of BYU, now it appears is if Boise State could emerge as the frontrunner for the 6-5 and 240-pound junior.

Rylen Su’a-Filo, DL, Orem (UT): With strong bloodlines, the 6-2 and 260-pound junior seems destined to follow in the family footsteps and play on Saturdays.

James Tomasi, DL, Provo (UT): Strong as they come, few matched his strength, and with a low center of gravity, 6-1 and 285-pound junior turned many heads.

Dillan Lund, DL, Millard (UT): With a motor that did not stop, he had one gear, full-speed ahead and the 6-3 and 240-pound junior never pumped the brakes.