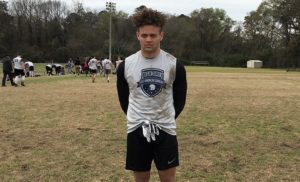 Back in the old stomping grounds, a handful of former teammates, several NFL veterans with nearby regional roots, were in charge at the Blue-Grey All-American Combine (Alabama Regional).

The Crimson Tide alum were a sight to see, and once joined by one-time colleagues such as Antonio Langham, Roosevelt Patterson, Chris Goode and Chris Edwards, everyone was in awe.

Meetings after the event confirmed that the one-time pros came away impressed with multiple prospects. What follows is a list of several individuals that what soon be forgotten.

Zyquez Perryman, QB, Pleasant Grove (AL): Young, with plenty of upside, the 6-foot-2 and 185-pound sophomore is on the map. Samford is one of the many interested.

Jaylen Walker, QB, Stanhope Elmore (AL): An undeniable talent, the 6-3 and 215-pound is capable of playing a number of positions, including a couple on defense.

Jaih Andrews, QB, Ramsay (AL): The 6-foot and 175-pound junior passed seemingly every test given to him. No surprise, Alabama-Birmingham was in contact not long ago.

Jayden Sullins, RB, Cullman (AL): Arkansas State, Southern Miss and Tulane are the schools to keep the lines of communication open with the 5-11 and 195-pound junior.

Tray Duncan, RB, Stanhope Elmore (AL): The 6-1 and 170-pound junior held his own. And then some. So did D’Marquez Williams from Baker and David Gardner from Minor (AL).

Tavares Womack, WR, Jefferson Davis (AL): Go ahead and count teams in the Sun Belt Conference, Troy in particular, as growing fans of the 6-foot and 174-pound junior.

Evan Delp, WR, Coosa Christian (AL): The 6-3 and 170-pound sophomore made plays, regardless of whether it was over the middle, down the field or along the sidelines.

Cam Reynolds, DB, Lincoln (AL): Injury aside, and with plans to attend another workout, the 5-11 and 185-pound junior has talked to South Alabama and Tennessee Tech.

Joshua McMillon, DB, Bessemer Academy (AL): The 5-11 and 170-pound junior turned heads during skills testing and kept the momentum going during the one-on-ones.

Luke Chambers, DB, Addison (AL): The 6-2 and 195-pound junior did not back down from anyone or anything. That said, next up is a recruiting trip to Tennessee Tech.

Alex Atkins, LB, Carbon Hill (AL): The path to success to seems clear for the 6-foot and 200-pound junior with Alabama-Birmingham and Florida Atlantic possibly in the mix.

Reece Martin, LB, Wicksburg (AL): The 6-foot and 195-pound junior made plays all over the field, sideline to sideline, and left a lasting impression by day’s end.

Caleb Drake, LB, Handley (AL): Determined to prove he belonged, the 5-9 and 210-pound junior took a big step in the right direction and earned the respect of his peers.

Gage Saint, OL, Hatten (AL): Houston, Memphis and Troy have the 6-5 and 283-pound junior on the radar. It’s likely only a matter of time before the offers follow suit.

Eli Richey, OL, Southern Academy (AL): Largely inexperienced, on paper anyway, sky appears to be the limit for the 6-4 and 270-pound sophomore. He could be an SEC target.

Cade Gothard, OL, Eufaula (AL): Landing a scholarship with a program from the Southern Conference could end up being an ideal fit for the 6-2 and 275-pound junior.

Carson Hatchett, OL, Blountstown (FL): Fast and physical, especially given his frame, the 6-3 and 260-pound junior certainly opened up eyes of the coaching staff.

Dallas Ingram, OL, Eufaula (AL): The 6-2 and 290-pound junior is a talking point for schools in the Sun Belt Conference and the situation is worth keeping a close eye on.

Dustin Woodham, DL, Wicksburg (AL): South Alabama, among some other programs just might be in the mix for a potential commitment from the 6-3 and 252-pound junior.

Theodore Jackson, DL, Stanhope Elmore (AL): The 6-3 and 305-pound junior was difficult to deal with down in the trenches, not only from the start, but till the finish.

John Piper, DL, Green County (MS): The 6-4 and 225-pound junior passed the eye test. With continued improvement, he’ll be ready to take the next step toward college.