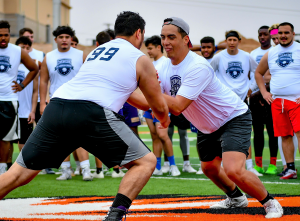 In terms of debuts on the national level, more specifically those in Texas, they don’t get much bigger, or better, than the Blue-Grey All-American Combine (West Texas Regional).

With the help of Beau Bagley and the El Paso Sports Commission, the workout went better than expected as local product and NFL veteran Ed Stansbury was lead instructor.

Another hometown hero, also a UTEP alumni who currently plays for the Green Bay Packers, Aaron Jones also gave back and volunteered his time, with father Alvin Jones Sr.

Not to be forgotten, amid all the NFL hype around, was the presence of All-American Combine participant, All-American Bowl invitee and North Texas commit Khatib Lyles.

What follows is a much closer look at multiple participants who left a lasting impression on the powers that be, mainly the coaching staff and media members Andy Morgan, Kaylee Heck, Andres Acosta, Jesse Tovar and Mando Medina.

Ben Carney, QB, Coronado (TX): The 6-foot-2 and 185-pound junior been in contact with nearby UTEP and the situation figure to be one to closely follow.

Zach Rodriguez, QB, El Paso (TX): With feelers from schools in the Ivy League, the 6-3 and 175-pound junior will most likely have options at the next level.

Orion Olivas, QB, Eastlake (TX): Still developing, the 6-2 and 190-pound sophomore is heading in the right direction. SMU and UTEP have him on the radar.

Michael Smith, RB, Chapin (TX): The 5-8 and 170-pound junior did a little bit of everything, and most of it well, that was both running and catching the ball.

Robert Hall, RB, Burges (TX): The 6-foot and 200-pound sophomore has plenty of upside and could very well be college-ready by the time he’s an upperclassman.

Rontayev’on Grant, RB, Austin (TX): The 5-8 and 170-pound sophomore opened up some eyes. Same can be said about Anthony Donacio from Eastlake (TX).

Isaiah Davis, WR, Pebble Hills (TX): The 6-3 and 185-pound junior often commanded the attention of many on hand, coaches and fans in the stands, alike.

Michael Haack, WR, Franklin (TX): The 5-11 and 160-pound junior might have been the most polished pass-catcher in the group. No one was more competitive.

Ian White-Torres, WR, Jefferson (TX): The 6-3 and 170-pound junior understood what was expected from him, and accordingly, delivered the desired results.

Jack St. Fleur, WR, Christian Unified (CA): Raw and somewhat inexperienced, there was no denying the fact that the 5-11 and 179-pound sophomore has tools.

Fernando Villegas, TE, El Paso (TX): The 6-3 and 245-pound junior will have options at the next level. Next, he’ll need to narrow down things and pick a spot.

Dare Olowe, DB, Americas (TX): With interest from the Pioneer Football League, it’s only a matter of time before the 6-foot and 175-pound junior finds a home.

Isaiah Ellis, DB, Lamar Consolidated (TX): Regardless of position, the 6-1 and 170-pound junior stood out in a crowd. He earned the respect of his peers, too.

Abraham Annabi, DB, Franklin (TX): The 6-1 and 177-pound junior was able to make plays all over the field, as did counterpart Evan Chisolm from Americas (TX).

Elijah Davis, DB, Pebble Hills (TX): Fast and physical, the 6-2 and 185-pound junior was up for anyone, and anything, at any time. Safe to say, he excelled.

Xavier Simmons, LB, Parkland (TX): The 6-1 and 200-pound junior had little, or no problems with covering the likes of quicker backs or bigger tight ends.

Jaime Escobar, OL, Burges (TX): With interest from Conference USA, including an offer from UTEP, the 6-6 and 330-pound junior was truly in a class all his own.

James Facio, OL, El Paso (TX): Plans are in the works for the 6-4 and 269-pound junior to stay close to home, right in his own backyard, and attend nearby UTEP.

Gustavo Gallardo, DL, Andress (TX): New Mexico and Sam Houston State are in the mix for the 6-2 and 285-pound junior. Same goes for Air Force and SMU.

Anthony Romero, DL, Pebble Hills (TX): Agile and also strong, with room to grow as well, the 6-2 and 215-pound junior impressed more than a few onlookers.

Josiah Holloway, DL, Canutillo (TX): The 6-2 and 255-pound junior was a force, with peer Christian Espinoza from Burges (TX) and Zoilo Soto from Jefferson (TX).