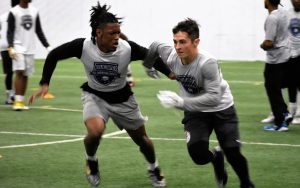 Given the workout’s debut in this part of the country, there was a fair amount of hype, albeit somewhat tempered, surrounding the recent Blue-Grey All-American Combine (Oklahoma Regional).

The turnout, however, exceeded expectations. The level of talent, moreover, was better than many could have imagined. So, plans are in the works already for a return to Oklahoma City (OK).

NFL veterans Reggie Young and Sheldon Jackson were lead instructors, even peer Tom George made an appearance as a mentor. Sooner State native Marcus Allen was on staff, too, among others.

We’d be remiss without nothing the fact that All-American Bowl alumni Tyree York and Tre Morris were involved, mostly in an effort to share their experiences on playing in the brand’s prestigious game.

That said, without further ado, what follows is a closer look at the prospects, some more high-profile than others, including a handful of under-the-radar types, who left a lasting impression.

Lafayette Wright, Will Rogers (OK): The 6-foot-4 and 170-pound junior has plenty of upside, along with both Preston Colbert of Midwest City (OK) and Kanan Hansen of Edmond Sante Fe (OK).

Brayton George, RB, Westmoore (OK): Whether the ball was put in his hands, or catching it out of the backfield, the 5-10 and 173-pound junior proved more than capable of getting the job done.

Jayden Flynn, RB, Watonga (OK): The 5-10 and 195-pound sophomore, on paper, was supposed to be one of the more inexperienced prospects on hand. Not the case. He was poised throughout.

Devin Hembry, RB, Hilldale (OK): Explosive in skills testing, particularly during the broad jump, the 6-1 and 170-pound sophomore had no problems with delivering results when the one-on-ones started.

Dawson Huddleston, WR, Marlow (OK): The 6-4 and 170-pound junior has been contacted by teams in the Mountain West Conference, specifically speaking Wyoming. The interest is warranted, too.

Sam Sherman, WR, Bixby (OK): No stranger to competition, the 6-2 and 182-pound junior had little, or no, problems with adjusting to the workout’s environment and opened up eyes in the process.

Eddie Mitchell, WR, Hilldale (OK): The 6-foot and 165-pound junior did not back down from any, and all, challenges. That type of determination, in fact, caught the attention of the coaching staff.

Lincoln Sefcik, WR, Enid (OK): A reliable target, especially down around the red zone, the 6-3 and 200-pound junior made a handful of memorable plays. Nothing wrong with his effort here.

Devin Hillmon, WR, Muskogee (OK): Crafty, with some good hands, the 6-foot and 180-pound junior did well, as did Jaylon Hudson of Douglass (OK) and Nick Sharp of Edmond Santa Fe (OK).

Drake Stoops, WR, Norman (OK): Eager to prove himself on the national radar, the 5-11 and 165-pound junior was unable to attend due to prior commitments. Still, he remains on the radar.

T’Aces Vick, DB, Midwest City (OK): The 6-foot and 180-pound junior nearly stole the show. In fact, he probably did. Near double digit offers, his next stop is the brand’s All-American Bowl.

Kamron Love, DB, Edmond Sante Fe (OK): Still an underclassman, the 6-foot and 155-pound sophomore played with the poise of a varsity starter from start to finish. His name is one to remember.

Marlo Hughes, DB, Enid (OK): The 6-foot and 195-pound junior showed a relentless work ethic, that was from start to finish. Taking a breather, missing out on a rep, simply was not an option.

Isaac Stoops, DB, Norman (OK): Similar to his brother, the 5-11 and 160-pound junior did not make the workout. Nevertheless, redeeming himself at the Southwest Regional could be in the cards.

Caden Wolford, LB, Meeker (OK): With good bloodlines, his brother Adrian Wolford recently committed to Texas A&M, the 6-1 and 190-pound freshman could be heading down a similar path.

Jake Sitsler, OL, Salina (OK): Because of unforeseen circumstances, the 6-7 and 315-pound junior was unfortunately a no-show despite a clearly stated desire beforehand to make his mark.

Ethan Hall, DL, Bixby (OK): Still growing, the 6-3 and 212-pound sophomore has serious potential. Kyler Baugh of Talahina (OK) and J.D. Eddy of Tuttle (OK) were two others who impressed.