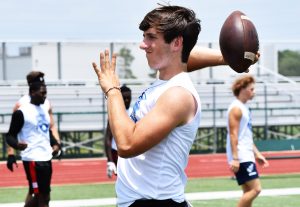 Similar to year’s past, with NFL veteran Chris Taylor and NFL veteran trainer Reggie Young as the lead instructors, the Blue-Grey All-American Combine (Houston Regional) was a success.

The real winners were the participants in attendance, each of whom was able to learn something new from the one-time professionals. Here’s a closer look at few of the many standouts.

Cade Bartlett, QB, Waller (TX): The 6-foot-3 and 210-pound junior was touted as one of the top players prior to the workout. He did not disappoint. Baylor, Houston and SMU are interested.

Ryan Depperschmidt, QB, Lake Dallas (TX): The 6-2 and 185-pound junior held his own. And then some. Teams from Conference USA, specifically speaking Tulsa, are in in contact.

Kameron Ransom, RB, Fairfield (TX): A jack-of-all-trades type, the 5-9 and 185-pound junior did a little bit of everything. Most of it well during the workout.

Jayce Gardner, RB, Moore (OK): The 5-10 and 200-pound sophomore showed somewhat surprising athleticism for his size. His future is bright, as a result.

Wes Bagley, WR, Magnolia West (TX): A big target, particularly down in the red zone, the 6-6 and 200-pound junior has talked with Kansas State.

Ian Butler, WR, South Houston (TX): North Texas and SMU have continued to keep the lines of communication open with the 6-2 and 195-pound junior.

Ryan Schmidt, WR, Tompkins (TX): The 6-foot and 184-pound junior with interest from North Texas was a favorite of the coaches. From start to finish, too.

Nigel Green, WR, Ball (TX): The 6-1 and 195-pound junior turned more than a few heads in this setting, as did his peer Brandon Smith from Dulles (TX).

Kirk Wilson, DB, Norristown Area (PA): Eager to test his skills against the best the Southwest had to offer, the 5-11 and 170-pound junior fared reasonably well.

Javon Barnes, DB, Wagner (TX): The 5-10 and 155-pound junior did not back down from any challenges and he earned the respect of many, mostly his peers.

Jalen Waddy, LB, Houston Westside (TX): Houston and SMU appear to be on the bandwagon of the 6-1 and 220-pound junior. And rightfully so.

Dias Redmond, LB, Cypress Ridge (TX): A rather imposing presence, the 6-foot and 220-pound junior went out and proved that he truly belonged here.

Jared Esparza, LB, Gonzalez (TX): Anything, and just about everything, that the staff asked him to do, the 6-2 and 220-pound junior did without question.

Jaret Porterfield, OL, Pearland (TX): The 6-4 and 300-pound junior landed on the radar of Kansas State or Texas State. The recruiting process is heating up.

Blake Hollis, OL, Groveton (TX): A while ago, Sam Houston State jumped on the bandwagon of the 6-4 and 307-pound junior. North Texas is now in the mix.

Dillon Alam, OL, Taylor (TX): UMass and UTEP are apparent fans of the 6-4 and 264-pound junior. An offer could materialize sooner rather than later.

Landon Leger, OL, Cypress Falls (TX): The 6-3 and 305-pound junior seems to be on the board for McNeese State, Memphis, Texas State and Tulane.

Clayton Courtney, OL, Columbus (TX): The 6-3 and 275-pound junior did well, as did Jaedon Hinchliffe from Palacios (TX) and Nolan Rogers from O’Connor (TX)

Carson Holloway, DL, George Ranch (TX): Schools from Conference USA, most notably Tulsa, have kept a close eye on the 6-2 and 245-pound junior.

Dylan Wright, DL, Chavez (TX): Big, and nasty at times (there’s certainly nothing wrong with that), the 6-4 and 260-pound junior played with a purpose.

Shane Peveto, DL, Timpson (TX): Good size, also with a fair amount of athleticism, the 6-4 and 220-pound junior was difficult to deal with in the trenches.

Elias Will, DL, Booker T. Washington (TX): The 6-2 and 220-pound junior is heading in the right direction, same for Danzeria Jernigan from Spring Woods (TX).